Home > Heartache > Will He Come Back?

Will He Come Back? 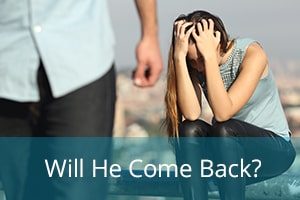 You remember, don’t you, all those times you felt so close to him that time stood still.

There was no one else in the world. Just you and him. Love wrapping you in a cocoon of happiness.

There was only one thing you needed for it to be perfect:

The knowledge that this would last forever.

He broke your heart.

And you were left with nothing but memories.

But those memories are worth more than you think.

They have the potential to bring him back to you.

And science says your chances aren’t too shabby.

Why We Love Reuniting with Exes

They’re especially common in young adults. One study found that nearly half of young adults have gotten back together with an ex.[1]

Even among married couples, anywhere from 10 to 20% have split up and got back together again.

Which explains the phenomenon of “boomerang breakups,” where your partner breaks up with you one minute then is at your door the next, begging you for a second chance.

Dating site Elite Singles found that about half of us would give our exes another chance if they came knocking at our door.[3]

Why do our exes exert such a powerful hold over us?

It all comes down to shared memories.

The Science of Unforgettable Love

He may be able to get rid of your picture and phone number, but he can’t get rid of the memories you made together.

Those memories live inside his brain—and yours—no matter how long you’ve been apart.

So you may not be his girlfriend anymore, but that doesn’t mean that part of his brain doesn’t still think of you as his girlfriend.

“The brain develops pathways based on learned patterns. So, if you laid down a powerful pattern that this person was your life partner, your brain can retain traces of that circuitry, even after you’ve bonded with someone new.”[4]

Psychologist Nancy Kalish wanted to know how powerful those patterns were. So she studied married people who reunited with a lost love.

She found that 62% of them were unable to resist having an affair with their ex—even though they never intended anything like that to happen.

High school and college romances have the highest likelihood of being rekindled, because memories formed at that age are more vivid.

Are these affairs just flings? Do the flames of passion burn out once couples realize they’re not the people they once were?

In fact, if at least 5 years elapsed between the youthful romance and the rekindling of the affair, the resulting marriage has a good chance of lasting (76% compared to 40% for the average marriage).

But here’s the key:

The youthful romances that stood the best chance of being rekindled didn’t end because of fighting or not getting along.

They ended because of parental disapproval, being too young, moving away, or going to a different school.

These relationships lacked closure. Couples felt snatched away from one another before they had the chance to see whether they could make it work.

Will Your Ex Come Back to You?

If your romance ended because of life circumstances—he got transferred, your lives went in different directions, you wanted different things—then you have a better chance at rekindling the romance than if your relationship ended because of fighting.

If you didn’t get along back then, chances aren’t great that you’ll be able to get along now.

The relationships with the greatest chance of being rekindled are relationships that were fundamentally good. You loved each other. You made great memories together.

Time can even work in your favor. Years apart won’t make those memories dim.

So get in contact. Reach out via social media, which is a low-risk way of contacting someone you’ve lost touch with. Mention a shared experience from the past to trigger his memories of you.

Connecting with a long-lost love is not recommended if you’re currently in a relationship. Kalish found that former high-school sweethearts cannot reunite as platonic friends. The emotions are too intense.

In the age of social media, no one is lost forever. Couples can get married to other people, end up divorced or widowed, and find each other again.

As long as you have those shared memories, you’ll have part of each other forever.