How Dating Inevitably Changes You 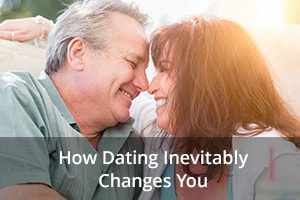 Do you ever wonder what would be different in your life if you hadn’t dated the men you’ve dated? Do relationships actually change who we are?

If you’re a fan of the TV show Parks and Recreation, you may remember Ann’s dating adventures in the third season. She decided to just have fun and date a bunch of different people. So far so good.

But with every new boyfriend, she started behaving differently. At one point she showed up at Leslie’s office wearing a literal cowboy outfit. Eventually, Leslie (being a good friend) told her she was going overboard, changing too much to accommodate the guys she spent time with.

A recent study suggests it may be closer to the truth than you’d think. Researchers from the University of Connecticut wanted to understand what happens to couples when one half of the couple loses weight.

Turns out, if one person decides to shed some pounds, their partner tends to follow suit—even if the partner doesn’t intentionally go on a diet! “The concept is called the ripple effect,” Amy Gorin, Associate Professor in Psychological Sciences, said. If you get healthier, your guy is likely to get healthier, too.

You already know where this is headed. The opposite also happens. If one person adopts bad habits, so does the other.

We’re heavily influenced by the people around us. Especially the people we date. And we have the power to influence them right back.

That’s a hard pill to swallow for some. It can be uncomfortable to accept that other people change who you are. But I want to encourage you to lean into this truth instead of pushing back against it.

Want to know how? I can tell you.

Before the first date.

First things first. If the people you date have the power to change you, then it follows that you should be selective about who you date.

Let’s say you have a thing for bad boys. That’s fine, but be careful. If you start dating a rebel, you’re likely to pick up some rebellious ways, yourself. Some of those might be good . . . and some of them might not be.

When you meet someone you find attractive, ask yourself if the influence he’ll have on you is the kind of influence you want. If not, he might not be the guy for you.

Stick to your values.

If you start dating a guy who’s into football and you end up following his favorite team, that could be fun. It’s just football. But what if he introduces you to something that clashes with your values?

While your values probably align with his most of the time, they won’t always line up.

So this turns into a balancing act. It’s good to remain open to other points of view, as long as you don’t lose touch with your own values. The best thing you can do is acknowledge that your values aren’t completely identical and agree that it’s okay to disagree on some things.

Letting him change you.

The best kind of attraction is rooted in respect. Ideally, you’re drawn to guys who are a combination of admirable and hot. If that kind of guy changes who you are, that’s a good thing.

Be both open to his influence and selective about how it affects you.

If he’s a gym rat and you’ve been wanting to get into better shape, let him be a part of that shift in your life. As long as you’re aware of the role your partner plays in changing you, his influence has the potential to help out a ton in your own journey.

On the other hand, you also have a lot of influence over him!

That doesn’t mean you can completely change who he is. The myth of turning a slacker into good boyfriend material is just that—a myth. But you can introduce him to new concepts, habits and experiences that will influence him in positive ways.

Never try to alter the core of who he is, but give yourself permission to give him the kind of support, encouragement and challenge that makes him a better man. If he’s worth it, he’ll want that.

The most amazing relationships are transformational. You and your man should end up as better people because of the influence you have on each other.

Don’t fight the fact that he’s going to change you. Lean into it . . . and help him grow, too. Getting this part of romance right is more fulfilling than you could possibly imagine.