Home > Commitment > How to Talk Politics with your Partner – (Even if You Disagree!)

How to Talk Politics with your Partner – (Even if You Disagree!) 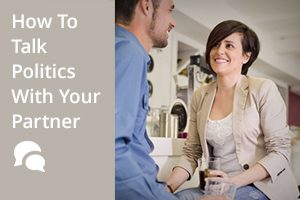 You know it as one of the most basic rules of etiquette. Don’t talk politics in mixed company.

But can you bring it up on a date?

If politics are important to you, shouldn’t you find out where he stands? Of course, you would like to. But something holds you back. It’s the fear that you might irritate each other upon discovering divergent views, no matter how small.

But what if there was a way to support HIM without supporting his views?

Okay, so imagine this scenario. The appetizer is arriving at the table. At that moment, he makes an offhand comment about an upcoming election. It’s obvious he’s a card-carrying democrat/republican. And you are very much the opposite.

You almost choke on your drink. “Tell me you’re not a democrat/republican,” you say without thinking.

In less than 60 seconds, the two of you are in an intense debate. Now you’re wondering if you can fit a fried cheese stick in his ear.

It’s no better in long term relationships. In some ways, it’s worse. When you’ve been with someone a while and you stumble across a severe disagreement, things can get heated.

The problem is if you date someone for any real length of time these kinds of topics are going to come up. There’s going to be an election. At some point, you will discuss spiritual views. You can’t avoid important things like that.

And you can’t avoid the fact that you won’t always agree.

So what do you do when you discover your partner’s deeply held convictions don’t always match yours? How do you keep that from driving a wedge between the two of you?

How do you keep the fried cheese on the plate instead of jamming it in his ear?

I know this is going to shock you, but I advocate having a plan.

Since some kind of disagreement is inevitable, the best option is to think about how you’ll handle it when it happens instead of hoping it doesn’t. And I’ll give you a spoiler right up front.

The two of you don’t have to agree on everything.

Good news, right? Plenty of happy, successful couples don’t see eye-to-eye when it comes to politics. If you and your guy don’t agree, it doesn’t mean you’re about to split.

But how do you avoid nasty fights?

First, crank up your curiosity.

When he tells you he’s a democrat/republican, ask questions. Invite him to explain how he arrived at that position. If the issue is complex, it might even be a good idea to pause the conversation and do some research on your own.

Don’t let one evening go to crap over a difference of opinion. If you don’t understand where he’s coming from, tell him you’ll look into it more and give his point of view some thought. Then move on.

Like I said, you don’t have to agree. BUT, it’s vitally important to validate his right to hold a different point of view. It makes it easier for him to do the same for you. And that’s the key to building a relationship that isn’t stumped by differing political views.

One of the reasons we fight about this kind of stuff is because we fear our partners are looking down on us for disagreeing. Make sure you let him know that while you don’t share his opinion, you can see how an intelligent person could believe what he believes.

That way you’re supporting him, even if you can’t support his views.

You and your guy aren’t going to have the same opinion about every hot topic. That’s okay.

You can disagree with him, even about politics, as long as he knows you believe in him.