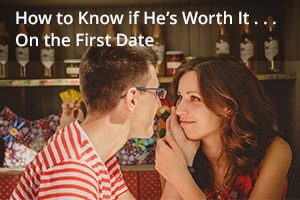 What’s the most ridiculous reason you’ve ever given for breaking up?

There’s a viral post making the rounds on social media. It includes some priceless answers to that question. Here are some of the ones that made me laugh (or cringe) the most.

Funny, right? But let’s explore the deeper side of this thing. Do you really think any of these people broke up because of the stuff listed above?

Of course not. Each justification is just the straw that broke the camel’s back.

In other words, if your dream guy wore the tackiest pair of jean shorts imaginable, you’d be embarrassed, but you wouldn’t ditch him.

In a sense, dating is a process of elimination. We get to know other people until we decide we’re no longer a good match. And we keep doing that until we meet the one.

But sometimes it’s hard to see it’s time to move on. After all, even short dating relationships represent an investment of time and emotion. It’s not always easy to walk away.

What if there was a way to determine early on if a guy even stands a shot at being a good match? Like, on the first date.

In fact, there’s ONE THING that determines, more than anything else, if real romance is possible.

If this one thing happens on a first date, there’s potential. If it doesn’t, don’t wait for him to ask you to get out of his cat’s chair. Just move on.

Let’s get right to the one thing that makes all the difference. If you have good conversation on date number one, things look promising.

But before you sigh and go on a Google search for the rest of the funny reasons people give for breaking up, let me ask you this. What does really good conversation look like?

If you don’t know, how will you spot it?

Here are four qualities that signal romance-ready conversation. If you see these on a first date, he’s worth getting to know better.

Not with his money or time, per se. With his ears.

Does he let you speak? Is there a flow to the conversation? Does he ask follow-up questions to learn more about you?

Some guys spend way too much time talking about themselves. Don’t be flattered by this obvious attempt to impress you. Recognize it for what it is – self-focused and insecure.

When it’s his turn to contribute to the conversation, are you interested in what he has to say? And can he talk about things other than himself?

If he launches into a diatribe about why your worldview is wrong, or if you cringe at his political ideas, that’s a signal your values aren’t aligned.

Even if he objects to what you think in a joking way, it’s tough to have a meaningful romance with someone if values don’t match.

The best conversations are organic. They wind and twist and you end up talking about all kinds of random things. Sometimes you can’t even remember how you got on THAT topic.

Conversations like that are first date gold. If the two of you can get lost just talking to each other, make plans with him again.

When people break up over stupid, petty things, it’s always a sign of deeper issues. You can eliminate a lot of wasted time (and many of those silly excuses) by being selective on the front end.

Those are the necessary ingredients for powerful, passionate romance.