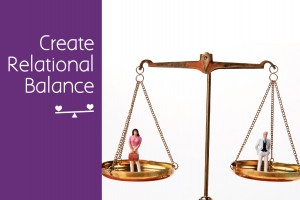 It’s no fun when you realize you’re doing more for him than he’s doing for you. He could give as much as you’re giving in the relationship. It’s not that he can’t. It just seems like he’s not willing.

And that’s why it hurts.

Sometimes our expectations for another person are based on what we know we’re willing to do for them. You know you’d move for his career, for example, so you want him to be willing to consider at least moving for yours.

And it’s not just the big stuff. It’s the people you hang out with, willingness to set aside hurt feelings for the sake of feeling close again, or being there for you when you’re in a bad mood.

There will always be sacrifices in relationships, but the moment you feel like you’re making most of them you’re in trouble. And the longer you feel that way, the more negatively it will affect the relationship.

The trick is to stop that imbalance from building into resentment.

The Impact of Resentment

If there’s an imbalance in the relationship, ask yourself this question. Are you starting to resent him?

Resentment is natural when we feel we’re being short-changed. If you’re feeling even a hint of it, you need to recognize that before going further.

Unrecognized resentment has a way of undermining us, but if you know it’s there you can face it and consciously choose what to do with it before it poisons what’s still good in your relationship.

If you have good communication patterns with your partner, start there. It’ll be a delicate conversation, so tread lightly. Frame your needs as opportunities.

Frame it as an opportunity for him to build something even more beautiful with you. Make him want to be your hero.

Another option is to be more open about your needs, but without actually pointing out that he is failing to meet some of those needs. Just talking about your needs sometimes does the trick.

Make sure he knows what you want from him. Avoid vague requests.

While I don’t recommend it, there is a third option. You could stop making sacrifices for him. I’ll warn you; this passive-aggressive move isn’t likely to help.

If nothing works, and he’s content to let you do all the work in the relationship, maybe he isn’t the one. Long term, it’s not going to work for you to stay if you’re giving a lot while he gives a little.

But just remember, there will always be moments of imbalance in any relationship.

The key is to recognize it and remain focused on resolving it rather than letting it shut down the warmth and hope that sustains your ever-changing relationship.