Home > Dating > The Narcissist Test: 13 Questions That Reveal If You’re Dating a Narcissist

The Narcissist Test: 13 Questions That Reveal If You’re Dating a Narcissist 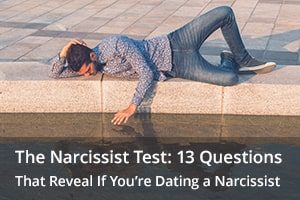 Remember those immature guys you used to date?

They never thought about you, unless you were useful to them. If you came down with a cold, there’s no way they’d drop by with soup and a movie. They only wanted to be around you if you were fun and up for having a good time.

The minute you displayed a mind of your own, they weren’t interested. Too difficult. They didn’t want anything serious.

Girls have always matured faster than boys. They learn at an early age how to get along and put other people’s needs first.

You’d think that by the time you hit your 30s and 40s, though, guys would start to catch up. They’d understand the pleasure of caring about someone other than themselves. They’d look forward to sacrificing for a family.

But is that the case?

Kristen thought her relationship would change once she and her boyfriend had a baby. But her boyfriend’s attitude quickly shifted from paternal pride to irritation. He blamed Kristen for not keeping up the housework, not wanting to have sex, and spending more time with the baby than him.

Abigail was so proud of her partner. He built a thriving company single-handedly. She knew his work would always come first for him, and she was fine with taking a supporting role. But increasingly she felt like she didn’t even matter to him. It was all about him, never about her.

Some men, no matter how old they are, want everything to go their way. They want the world to revolve around them. They’re not willing to change their ways to accommodate someone else.

How do you spot these men before it’s too late?

Clinicians in the mental health field have made a stab at it. They’ve defined a pathological need for a flattering, grandiose self-image as narcissistic personality disorder.

These are folks with a huge sense of entitlement. They think they’re special and should be treated accordingly. They use people and have no interest in how others are feeling, except as a means to manipulate them. They love being flattered and enjoy fantasizing about the amazing life they know they deserve.

But here’s the crazy thing…

They have very fragile egos. They can’t stand being challenged. They love you as long as you think they’re wonderful, but the minute you bring up any criticism—however valid—they turn on you.

You can’t have a healthy relationship with a narcissist. They’re not capable of the give and take required for lasting love.

So is there some kind of “narcissist test” you can give a man before you start dating him?

Only a mental health professional can diagnose a narcissist. And given that most narcissists believe they’re perfect, it’s unlikely that will ever happen.

But you can make an educated guess as to whether your guy is self-absorbed because he’s still learning how to be in relationships … or because he’s built that way.

Ask yourself these questions:

The more yes answers, the more likely he’s a narcissist.

If you’ve fallen for a narcissist, don’t beat yourself up over it. Something many people don’t understand about narcissists is that they can be very charming when you first meet them. They’re sometimes the life of the party, and they genuinely do seem special.

At first, the narcissist will treat you like a queen. He’ll show you the amazing life you could have if only you were his mate. You won’t believe your luck.

It’s not until you’re in a relationship with him that these darker personality traits emerge.

If a man appears too good to be true—handsome, confident, wealthy, popular, successful—he may be.

Look for men who have a kind heart, who can stand in someone else’s shoes, and who readily admit they make mistakes.

You don’t want a perfect guy.

You want a guy who knows he’s not perfect, and isn’t afraid to keep trying to improve.

A guy who’ll learn along with you what it takes to live life side-by-side.