Home > Commitment > Why is He Emotionally Unavailable?

Why is He Emotionally Unavailable? 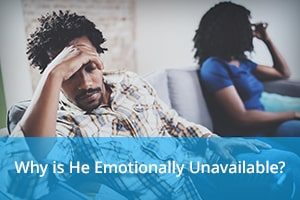 Okay, so maybe there isn’t any “magic spell” that turns an emotionally unavailable man into a romantic superstar…

But wouldn’t it be great if it WERE that easy?

Say these words, and kapow! He’s sharing a story about the time his pet kitten died when he was eight and he vowed never to let his heart get attached to a pet again.

The “guy code” forbids it. Men aren’t supposed to let anyone see their soft, gooey side.

There’s even a name for this: masculine gender role stress.

It’s the conflict men experience between the way they’ve been socialized to “be a man” and the skills their real life requires of them.

But men often learn that showing emotions is unmanly. They keep their feelings close to their chest to avoid revealing any weakness.

And when they fall in love, they hold back. They don’t want her to find out. Their buddies may even make fun of them for having feelings for a woman.

As a woman, you probably can’t imagine being shamed for having feelings. Of course you have feelings! Feelings are good. They’re healthy. Expressing your feelings keeps you sane.

So when you come across an emotionally unavailable man, your instincts tell you there’s something wrong with him. Why is he holding back? Why isn’t he letting you in?

Is there something wrong with him?

Or are you just misunderstanding one another?

I can’t speak for all emotionally unavailable men, but from my perspective there are several reasons men appear to be holding back from the women they’re dating.

Understanding these reasons boosts your chances of getting him to open up and be the man you desire.

Many women who struggle in dating have an anxious attachment style. They never feel secure in a man’s love. They always want to be closer to him. It feels like death when a man pulls back.

Many men who struggle in committed relationships have an avoidant attachment style.  They feel suffocated by too much togetherness. They need their space. They can’t always communicate that, though, so they drive people away instead.

A man who appears emotionally unavailable may be protecting his sanity by keeping you at an arm’s length. His avoidant attachment style means he can’t give you the closeness you crave—especially if you’re anxious.

Don’t expect him to change, but do expect him to try to understand your needs (and vice versa). Learn together about how your attachment styles impact your relationship.

Let’s say you fall in love with a masculine man who’s the strong, silent type.

Two months into your relationship, you feel like hitting your head against the wall. He won’t open up! He never tells you how he feels.

It’s a red flag when a man who’s usually free and open with his feelings suddenly clams up.

Some men have difficulty knowing what’s going on inside of them. This is a trait called alexithymia. These men can tell when their heart is beating fast or their stomach is churning, but they can’t explain what they’re feeling or where those feelings come from.

As a woman, you may find it incredible that anyone could NOT know how they feel. But it’s possible—and in his case, highly probable.

Although more and more parents are recognizing the importance of raising emotionally literate sons, he may not have learned to name his feelings.

Instead of judging him, help create a safe place for him to explore and gradually learn to express his feelings with words.

He may not be in a stage of his life where he wants commitment. He may be seeing other women. He may not be over a past love interest.

How can you convince him to open his heart?

That could take a book, but just remember this:

He won’t have the chance to miss you if he’s already got you.

Match his level of availability. If he’s not available, don’t be available. Make him put in the effort to see you.

And keep on looking for someone who has the emotional availability you desire—without having to work so hard for it.