Home > Commitment > A Decision Flowchart: Three Options When Your Man Is Pulling Away

A Decision Flowchart: Three Options When Your Man Is Pulling Away 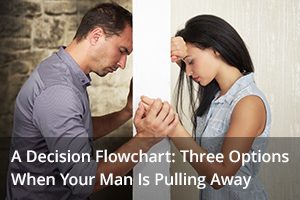 Should you pursue a man when he seems to be pulling away?

So I’ve created a decision flowchart to help you decide.

When you really like a guy, giving up just feels wrong. Especially if both of you have invested a lot in the relationship. Especially if you both felt a spark of something special. Something uncommon. Something valuable that will be hard to ever find again with someone new.

And yet, there are times when it’s pointless to keep banging your head against a wall. Especially when the person sitting on the other side of that wall stops returning your phone calls!

This is a dilemma with important implications for your life. Much of your future will depend on what you do next. So it makes sense to take a step back and consider all your options.

The main options I want you to consider are these:

Each of these factors have multiple spin-off considerations. So it gets complex. And all that complexity can leave you feeling stuck because of uncertainty. But with a step-by-step decision matrix, you can reach some decisions about the best step to take next.

Click the “continue reading” button to see a flowchart that can help you choose what to do next. 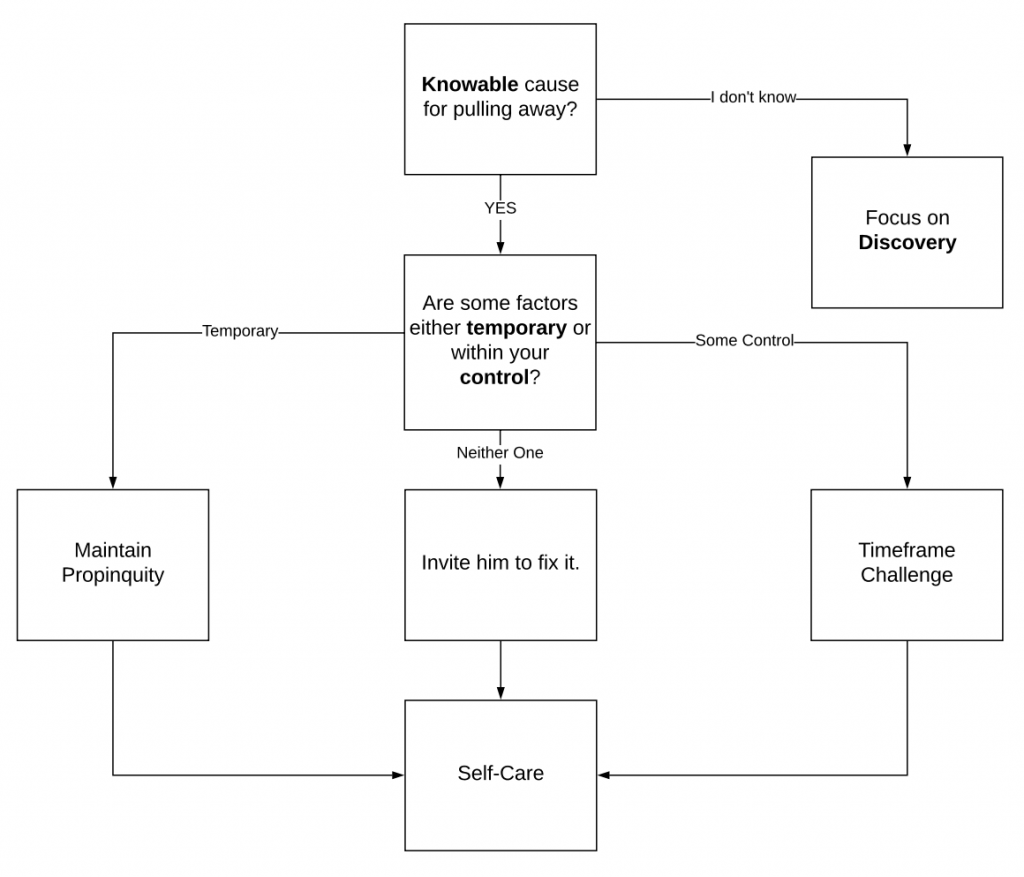 First, consider whether you already know his reasons for distancing himself. If you really don’t know, then there’s nothing more important than discovery. I’ll offer some discovery techniques to show you what I mean.

My favorite discovery technique is the simplest one…

…Ask if he even noticed he’s doing it. Does he realize he’s been pulling away?

Sometimes people start doing things without ever having made a conscious decision to do so. We can drift slowly, failing to notice how far we’ve drifted off course.

Find out if this is the case for your man. Just be careful to make sure it doesn’t come across like an accusation. Ask as if you assume it’s something accidental that he would be eager to correct.

Doing it that way allows him to save face. It lets him change the way he’s been treating you if he realizes he doesn’t want to lose you. And if he does need to tell you something, this is an opening for him to admit that he wants to change some things. If that’s the case, it’s better to know the truth.

Another discovery technique is the invitation method. With this method you just start talking about ways to work together as a team to rebuild feelings of closeness. It’s like you skip over the preamble to this discussion. You skip past all the awkward questions about why he’s doing it or who’s to blame. And instead you just invite him to fix it with you. It’s like you skip straight to the solution.

Now, here’s what will happen next. He’ll either join you as a team member, accepting the fun challenge of finding, say, five new, out-of-the-box ideas for spending quality time together within the next month, or he will resist by throwing out excuses. And it’s the excuses that help with the discovery process.

You see, excuses often reveal why he’s pulling away.

For example, one of the most common reasons men pull away is because he’s been feeling beat up by life in some way, whether it’s a threat to his position at work, health problems, money worries, or some combination of those types of things.

For us guys, romantic feelings decrease a lot when we’re feeling beat up by life. When things are going well, relationships become more important to us. It’s a sad reality of how male instincts work. I wish it wasn’t true, but I’ve seen it enough times to realize that it’s a very common thing for men to pull away when they are feeling less secure.

In a situation like that, his excuses may reveal his reason for pulling away. He may say things like, “I’d like to see you more often but I’m not sure I can commit to having much time for that right now. Things are really busy at work.”

As a woman, your tendency might be to dismiss such a comment as a meaningless excuse the covers the real reason. Because most women would rely more on their significant other during times of stress rather than pulling away. But guys think and act differently in that regard.

Alternatively, your guy may say, “Yeah, that sounds great. We should definitely plan some stuff.” And then show no initiative and act surprised when you start planning things a day or two later.

In that case, you are once again in a position to listen to his excuses. But don’t just listen. Read between the lines. Does his voice tone seem to suggest the very idea of planning things that cost money? Does he perk up when you offer a low-energy alternative like, “…Or we could just order Chinese food and watch TV at your place if you’d prefer?”

Discovery can take some time. And it is important. But make sure you mix it in with no-pressure positive interactions. You don’t want to badger him continuously with questions. Invite him into dialogue, but make sure the balance of your interactions—the emotional tone—remains positive and relaxed. Don’t stop enjoying the relationship while you wait for it to improve.

Now let’s consider what to do if you already know some of the reasons he’s pulling away.

Let’s first tackle a scenario where you answered yes to the first question about whether his reasons for pulling away are knowable. And you decided the factors getting in the way are temporary—things that might change if given enough time.

Knowable? Yes. Temporary factor? Yes. In this case, your job is to maintain as much propinquity as possible. Let me explain what that means.

For those of you who have studied my relationship course, What Men Secretly Want, you already know how important propinquity is as the number one variable that predicts who ends up with who. But for those of you who are less familiar with this concept, let me give you a brief summary.

Propinquity refers to the likelihood of two people interacting. The more time we spend in the presence of someone of the opposite sex, the more likely we are to eventually be in the right frame of mind to experience a spark of attraction…even if the spark was not there initially.

It works the other way too. If two people spend enough time together, the “in love” feeling is likely to be less strong at certain points in time relative to other times (sometimes temporarily fading completely).

In other words, if the vibrancy of attraction he’s feeling for you is low right now, but you remain an active part of his life, his feelings for you will most likely rekindle in time…without you doing much of anything differently.

If that’s true, then time is your ally. Because just remaining in close contact over a period of time is likely to bring the two of you to a better spot in your relationship.

Just keep the doors of communication open. the compatibility that initially sparked attraction between the two of you will return. In this scenario, your job is simply to make sure you continue to have enough propinquity while you wait out the temporary factors that have diminished the intensity of your bond.

Of course, this is assuming the temporary factor is something outside of your control, like stress from his job, or kids from a previous marriage who need his attention right now. But if it is something within your control, then of course you should take action. Let’s consider that scenario next.

If you follow the decision flowchart down to this scenario, you’ll see that the action it calls for is a “timeframe challenge.” Here’s what that means.

It means you know the reason he’s been pulling away and it’s something you can influence with your own actions. In other words, you have power to do something about it. In this case your job is to set a specific time frame during which you will attempt to change things.

There’s a tendency for us to gradually adjust or accommodate to problems. And I’ve seen many women spend years in miserable relationships that don’t meet their emotional needs. They stay because they initially thought they could fix things, but when it did not at first yield to their attempts to fix things, they tried something else, then something else, only to find that one day they had become so used to the problem that it just felt normal.

Don’t let this happen to you.

If a man is pulling away, and you’ve done all you can on your side of things to overcome the problem, only to find his investment in you has not improved, then you owe it to yourself and your future happiness to pull back and reassess.

Set a specific time frame during which you will try to improve things. Mark it on your calendar. If the problem still exists when you reach that point in time, it’s time to reassess your strategy. It’s also time to consider whether this is the right person for you.

So if you’ve given him plenty of opportunity, and you’re the only one working for change, it’s time to consider the possibility that he’s a wonderful person you have romantic feelings for, but not the right person for you.

Here’s the good news. Most of the time, setting a timeframe and taking action brings about a positive change.

A timeframe challenge decreases your stress because it frees your mind from the need to constantly reassess the situation. It lets you relax into the present moment, working to change things for the better but not constantly questioning whether you should stay in the relationship.

Eventually, one of two things is likely to happen.

Once you’ve reached a recommended action step on the decision flow chart, the next step is self-care. There’s a reason for that. You need to control what you can in the relationship, but give the rest of your time and energy to other things.

This is important for good mental health. The worst kind of stress comes from things we can’t control. So take action, but then refocus on building up your resilience in other areas of your life that have nothing to do with your primary romantic relationship.

Spend time with friends. Improve your physical health. Learn something new. Meditate. Get into a good book series. Because No relationship can thrive for the long term if you’re not taking good care of your own emotional needs and physical health.

This flow chart is here to facilitate decisions. It’s stressful to live in a state of limbo and indecision for long periods of time. You may not have all the facts yet. But you can make a decision about the next step right now. Then go back to good self-care until something changes or new information emerges.