Why a Bad Day Can Make You Hate Your Relationship 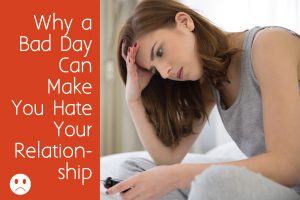 Most of us would assume these questions have nothing to do with one another.

After all, how you feel at this very moment is irrelevant to how you think you’ll feel about your boyfriend in a year. Right?

A classic study in the Journal of Personality and Social Psychology[1] found that people report greater satisfaction with their lives when the weather is nice or when they’ve been thinking about something happy.

As everyone on vacation knows, life looks better when it’s sunny and hot.

How we feel right now also affects how we think we’ll feel about the future.

If someone interviewed you right after you’d had a particularly nasty argument with your boyfriend, you’d probably express serious doubts about your long-term compatibility. Spend the rest of your life with this monkey? Not likely.

But if someone interviewed you right after a Valentine’s Day in which your boyfriend pulled out all the stops, you’d probably have a decent idea about what style of wedding dress you want and how many guests you’ll invite.

Knowing this gives us some fairly important information about what not to do in relationships.

Don’t decide to marry your partner on the spur of a moment, just because you’ve had the most amazing weekend away with him.

Don’t break up in the middle of an argument, just because he’s made you mad.

In fact, try to avoid making any long-term decisions when you’re in the midst of strong emotions, because how you feel in the moment could prejudice your view of the future.

And feel free to use this psychological trick on him.

If you want to ask him something that involves a future commitment, wait to ask until he’s in a stellar mood. The better he feels, the more likely he is to say yes.

(All children know this trick. They save their big requests for when Mommy and Daddy are in a good mood.)

For example, imagine that, two weeks after a horrible blow-up, you’re sitting on a warm sandy beach with your beloved. A reporter comes along and asks you if you’d agree to answer some questions for his article about honeymooning couples. You shyly shake your head and tell him you’re not honeymooners.

“Could have fooled me!” he exclaims. “You two look like you know the secret to a happy relationship. Care to share?”

How would you respond?

Would you mention the argument you had two weeks earlier and correct his false assumption? “Oh, no, we’re not perfect. We argue like everyone else.”

Or would you completely forget you’d ever argued? “Why, yes, we do know a lot about being happy.”

After all, this reporter thinks you’re the epitome of a happy couple. Happy couples don’t argue. So whatever happened two weeks ago must have been just a blip in your generally blissful relationship.

We revise the past based on how we’re feeling right now.

You can see this bias in full force after a breakup. When couples split, you often hear exactly why each of them knew it wasn’t going to work from the beginning. “But I ignored all the red flags because I was sooo much in love.”

(It’s the first you heard of those red flags, but whatever.)

It isn’t often until strong emotions have settled—maybe a few weeks later, maybe even a few years later—that separated couples can talk objectively about the relationship. “Yes, there were some bad bits, but we had some good times, too.”

Knowing this, you might find it easier to forgive an ex for his B.S. post-breakup. All that stuff he says about never having really loved you anyway isn’t necessarily true. He might simply be reinterpreting the past based on the pain he’s feeling in the present.

You might also avoid asking your partner how come he fell in love with you when he’s in a bad mood. The worse he feels, the less likely it is that he’ll give you the answer you want.

Moods matter. They color how we predict the future and how we explain the past.

Just another example of how our minds enjoy playing tricks on us. Luckily, now that you know the truth, you get the last laugh.