Home > Commitment > When He’s Not Putting Your Relationship First

When He’s Not Putting Your Relationship First 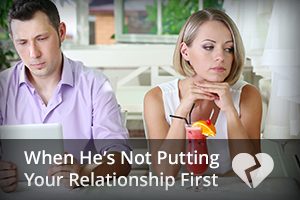 Do you ever feel like everything else in his life comes first instead of you?

His friends. His sports teams. His gym. His phone.

It’s not like you expect his undivided attention 24-7. But it sure would be nice if once in a while you heard him say, “No, I can’t do that. I’m spending the evening with my girlfriend.”

How do you encourage him to prioritize your relationship, when there are so many other things competing for his attention?

Good question. But to understand the answer, let’s take a look at one difference between men and women.

You see, relationships occupy a different role in men’s lives than they do in women’s.

Relationships keep men grounded. A man feels secure knowing he can go out in the world to do battle since someone will be waiting for him when he returns.

But, to be successful, he can’t linger too long over thoughts of his lover. He has to muster all his focus, courage, and energy for the challenge at hand. When he fights, he fights alone. That’s because the male mind is compartmentalized.

Love is important to a man. But love won’t keep him at home.

For women, love is home. When a woman is in love, she takes thoughts of her lover with her everywhere she goes.

Love releases energy that makes all her daily activities feel less overwhelming, less effortful. It’s the energy of love she carries with her all day long.

It’s hard to see, then, why men would compartmentalize their relationships when love is such a powerful, positive, and pervasive influence in your own life. But men do compartmentalize love. And that’s very important to understand.

You might picture the different areas of a man’s life as balls he’s trying to juggle. His friends are one ball, his work another, romance another. A man arranges his life by juggling the balls.

You might be with a man who has a short attention span. Whichever ball falls into his hands is the one that gets all his attention. But then it’s time to throw that ball back into the air and catch the next one. He jumps from one focus to another, unable to prioritize.

So what can you do?

Before you do anything, you need to know if this is typical male behavior or the behavior of a man who just isn’t committed enough.

Ask yourself a few questions:

If, in your heart, you suspect he’s not putting you first because you just aren’t that important to him, then do something about it.

If, on the other hand, you suspect he’s simply being thoughtless, then ask one thing of him…

That’s okay if he doesn’t call you when he’s with his friends, or if he has to cancel a date because of work deadlines. But you want his full attention while you’re together.

He can put away his phone, turn off the game, and enjoy quality time with you with no distractions. He’s an expert at focusing on one thing. When the love ball is in his hands, that focus should be you.

As the name suggests, “quality time” is a matter of quality, not quantity. You’re not telling him you need great chunks of his time. You simply want a slice of time where you’re the priority. Where you can share a sense of closeness and shut out the world.

As little as 15 minutes a day can make a huge difference.

Sometimes, he won’t be the priority of the moment in your life. That’s okay. Because when you do see him, you’ll give him your full attention.

If you need more of his attention, start small. Ask for his full and undivided attention when he has carved out time to spend with you. This will work with (rather than against) his natural male tendency to focus on just one thing at a time.