Home > Dating > What to do When He Makes You Mad

What to do When He Makes You Mad 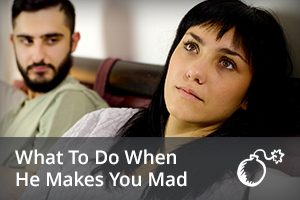 Maybe you can relate to Marcy’s story.

She was at her wits end. It had been a pretty cruddy day.

She slept late that morning. Work had been…well, work. Certainly not a vacation. She missed her spin class that afternoon. And to top it off, Peter cancelled their dinner plans at the last minute.  Why? To go to a game with some friends.

You’ve been there, right? He does something that makes you want to scream. But, like Marcy, you don’t scream. Instead, you call a trusted friend, meet for coffee, and indulge in an epic venting session.

Venting often feels good in the moment.  But sadly, venting can make things worse in your actual relationship. In fact, research shows that it’s far more likely to intensify negative emotions in the long run. That was certainly Marcy’s experience.

As they were finishing up their conversation, Shannon gave her a hug.

“Yes, it feels good to talk. I just wish he wasn’t such a jerk.” Even though she’d griped about Peter, she still felt upset.

But it’s not good to keep anger all bottled up inside, right? Aren’t you supposed to let it out?

That idea came from an antiquated theory of how emotions work. It started back in Sigmund Freud’s day when it was commonly believed that emotions work like hydraulics. As if an emotion was a substance that would squirt out your ears if it did not come out some other way.

But modern science has disproven that way of looking at anger and frustration. Emotions arise live, in the moment. They depend on our beliefs and perceptions.

That’s why you can be furious one moment, and suddenly happy the next when one tiny bit of information changes everything.  Like you miss a flight and feel miserable about the wasted money. But then you learn the aircraft went missing somewhere over the Indian Ocean. Now you feel grateful. And it wasn’t because you “let your anger out,” about missing the flight.

Therapists no longer advise people to punch a pillow when they’re angry. Because the research shows you’re better off relaxing your muscles and thinking calming thoughts. Or writing down your options for how to respond to an upsetting situation.

You see, anger is not something you can purge.  Expressing anger isn’t enough. If all you do is talk about why you’re mad, you’re just dwelling on your anger.

And, according to psychological research studies, dwelling on anger will only make you angrier. Which, ironically, SETS YOU UP for a fight with your guy instead of defusing it.

Kind of the opposite of what you want.

Fortunately, there’s a better way to deal with anger.

When you’re angry, it is better to express your anger, but only if you can find a way to do that productively. And despite popular belief, venting is not productive.

It’s far better to deal with the stuff that’s frustrating you head on. Here’s how you do that.

Not your best friend. Not your mom. Not a co-worker. Your guy.

In Marcy’s case, it would be a good idea for her to sit down with Peter and explain that she had a horrible day. When he cancelled their plans, that was the icing on the cake. It really hurt and upset her.

The goal is a productive conversation. Before you start talking, it’s important to know what kind of outcome would make you feel better. In other words, know what resolution looks like.

It would be easy to lay into him. Try to avoid that. Instead, shoot for something more than just expressing how you feel.

Marcy might tell Peter that she wants him to honor their plans in the future, even if some other awesome opportunity comes up at the last minute. Resolution is knowing that he values time with her.

Make sure he knows why you feel the way you feel and how to avoid repeating the situation.

When you’re upset with your guy, don’t just dwell on your anger. While it’s always okay to seek advice from a trusted friend, avoid venting sessions. They don’t help.

Instead, make it a point to use the checklist above. That’s a far better strategy for dealing with anger, especially with the man you’re investing your life in.