The Upside of Relationship Mistakes 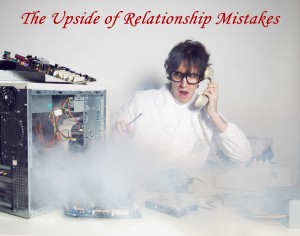 Which is better? To avoid mistakes altogether, or to watch for your mistakes, expecting them on a daily basis?

The answer may surprise you.

Back in the 90’s, IBM built a computer called Deep Blue. It played chess. In 1997, it actually beat Garry Kasparov, a world champion. Unlike human players who rely on intuition, it worked by calculating thousands of potential moves every second. And, it was good enough to take down a human world champion.

In contrast, TD-Gammon is a computer program that plays another classic game–backgammon. But instead of being pre-programmed with an extensive knowledge-base, it’s programmed to simply learn from its mistakes. Each time it plays someone, it makes adjustments to its strategies based on what worked and what didn’t.

When Deep Blue was fired up for its now famous match against Kasparov, programmers had to use a crazy-complex cooling system just to keep the thing running. It takes a lot of power to shuffle through every possible move every second! TD-Gammon, on the other hand, becomes more efficient the more it plays. Like a person, it learns from its mistakes and becomes a better player over time.

So, which is better?

In theory, Deep Blue didn’t make mistakes, but it couldn’t learn, either. Said another way, it would never get any better. That’s true because mistakes, while painful, are how we grow.

So hard that, like Deep Blue, you’re almost always on the verge of overheating.

Stanford psychologist Carol Dweck has spent the bulk of her career studying this very thing. She’s discovered that school children who don’t feel pressured to always be right tend to view learning as a growth process. And guess what? They’re far more likely to excel. Unlike kids who think their grades define their value, “growers” don’t hold back. Instead, they embrace risk, expecting to make mistakes along the way.

Do “growers” sometimes miss the mark? You bet. But, they understand that’s a part of life. It doesn’t mean they aren’t successful. It just means they have more to learn.

What an amazing approach to relationship that can be.

I’ll be candid. In dating, and in life, you’re going to make mistakes. I don’t care how smart you are. No one is perfect. Because mistakes are painful, a lot of people work very hard to avoid them. They shy away from risks because the idea of screwing up is just too much to bear.

But, they shortchange themselves.

You can’t grow without messing up from time to time. Mistakes, even in relationships, don’t mean you’re broken or flawed. They mean you’re human. The healthiest approach is to expect shortcomings. And when you fall short, don’t waste time and energy beating yourself up over it. Instead, resolve to learn from it.

Over time, that will make you a better partner, and a better person. Plus, you’ll be able to ditch the stress that comes with thinking you have to get everything right.

The next time you feel you’re mucking it up in your relationship, go easy on yourself. Give yourself and your partner permission to make mistakes. And when the inevitable mistake happens, humbly view it as an opportunity to learn and grow. Regardless of who caused the pain, look for the hidden gems of insight that emerge from every single new experience.