Home > Commitment > The Shadow in Your Relationship

The Shadow in Your Relationship 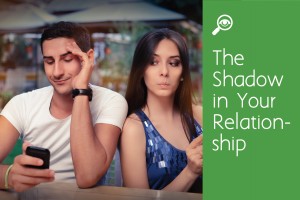 Janice wasn’t trying to snoop. She was just looking up movie times. Her phone was in the other room, so she grabbed Brad’s off the coffee table.

But before she could fire up his browser and do a quick internet search, he got a text message from someone named Cheryl.

“Last night was unexpected!” That was it.

He said he was working late last night. Some kind of sales meeting. Immediately, Janice felt worry settle in. She’d been cheated on before, and she didn’t like the idea of living through that nightmare again.

But things seemed to be going well with Brad. If she questioned him about the message, it could send him running.

What to do? Ask him about it even if it freaks him out? Or let it go and leave herself at risk?

Particularly in the beginning stages of a relationship, there are all kinds of opportunities to doubt the other person. After all, that’s when trust is still in its fledgling stages.

Vague little things, like a text message or something you spot in his apartment, or his erratic schedule, can leave you feeling suspicious. Before long, you slip into a mindset of apprehension, even when the evidence is paper thin.

There’s a better way to handle these kinds of situations.

According to a Swedish proverb, “Worry often gives a small thing a big shadow.” In my mind, I picture a mouse standing in a doorway. His shadow looms on the wall across the room, a huge, dark spot in spite of his small stature.

That’s what worry does to us. It distorts what we see. More often than not, the shadow of worry is bigger than the problem itself. That’s because worry changes you. And in a relationship, the effect is rarely positive.

When you worry about his faithfulness (or anything else about the relationship), you end up preoccupied in every interaction you have with him. You’ll be distracted when you talk to him. You won’t be as chipper or positive as normal. You’ll seem far away and detached. Even if you’re good at hiding your feelings, it will almost certainly show.

The result is emotional distance. And a lot of guys won’t even ask about it. They’ll just assume you’re losing interest, which will feed your sense of worry, and the vicious cycle keeps on going until the relationship fails.

Don’t let worry do that to you.

When you’re concerned, even early on in a relationship, you have two choices. Either make a firm decision to give him the benefit of the doubt, or ask him directly about the situation. Trust him or talk to him.

It’s as simple as that. Men tend to favor direct communication. Most guys will appreciate a direct approach if you have questions. And if you can just let the worry go. Because that’s even better.

Whichever approach you take, don’t let the shadow of worry become a third wheel in your relationship. When that happens, you lose. You lose whether or not the worry was legit.

Instead of worrying, meet it head on. Make a firm decision to either believe the best or ask him to explain.

Nine times out of ten, that enormous shadow only represents a mouse-size problem.