Home > Commitment > The “Passion Killer” Emotion. Do You Have It?

The “Passion Killer” Emotion. Do You Have It? 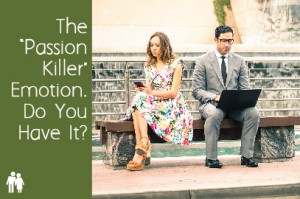 Indifference. It’s the saddest feeling in the world. Which is ironic, because indifference isn’t a feeling at all.

It’s the opposite of a feeling.

An indifferent person is like a car with no gas. People reach a point of indifference when there’s just nothing left in their emotional tank.

Indifference is the opposite of the things that make us human. Love, joy, anger, fear, hunger, curiosity, passion, lust and even loss– all vanquished by indifference.

Nobel Prize winner and Nazi prison camp survivor Elie Wiesel put it this way: “The opposite of love is not hate, it’s indifference.”

Indifference is sadder than sadness. When a person is indifferent, they aren’t engaged in life. They don’t care. Nothing matters. What could possibly be sadder than that?

I tend to think of indifference as an early symptom of soul sickness. Don’t ignore this red flag. If you’re feeling it, even a little bit, it’s time for a change. Here’s why you need to act fast.

Indifference is both progressive and contagious. If you give indifference a chance to take root, the sense of not caring will only grow. What feels like mild apathy today can be full-blown indifference tomorrow, sucking the joy and passion out of every area of your life.

As if that’s not bad enough, indifference is also like the flu. It passes easily from one person to another. Perhaps that’s why indifferent people tend to cluster together.

When you plunge headlong into life, investing yourself deeply in something you truly care about, life begins to flow through you. That life force is the antidote to indifference.

But your passion has to be real. In other words, you have to genuinely care enough that you’re willing to invest time, effort, and energy into something you believe is worth-while.

If you do that, an amazing thing will happen. People who care deeply often discover hidden resources and strengths in themselves they didn’t even know were there. You’ll come alive in a special new way. It will make your life, and the lives of everyone around you, better.

Reclaim who you were meant to be.

Purpose makes life rich and meaningful. So reject indifference. Live the passionate, purposeful life you were meant for.