Home > Dating > The Negativity Bias That Brings Down Relationships

The Negativity Bias That Brings Down Relationships 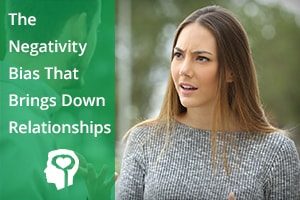 He says you look beautiful tonight…

But all you can remember is the last time you wore this outfit and the rude comment he made.

But all you can remember is that time you argued and he said he regretted ever meeting you.

Does he ever tell you the truth, you wonder, or does he just say what you want to hear?

That line of thinking can drive you crazy.

Human brains latch onto negative experiences. Our brains assign much greater importance to one cruel comment than a dozen compliments. This “negativity bias” is part of our programming.

And it can sabotage relationships unless you’re onto it.

In a minute, I’m going to show you a technique that will help you break free, but first try this exercise to see whether the negativity bias is at work in your love life.

Take a moment to select a relationship from your past. Now, try to think of as many special, beautiful moments from that relationship as you can.

Next, try to recall a few awful, terrible moments from that relationship.

Which did you find easier:

Coming up with good memories or bad memories?

If you’re like most people, the bad memories were easier to remember by far.

There’s a reason for that, and it dates back to the dawn of human history.

Our ancestors needed to remember which tribes were hostile, which regions were dangerous, and which plants made them sick. It was more important not to get killed than to have a good time. Those who kept their attention firmly focused on avoiding bad things were rewarded with survival.

That strategy works. You use it all the time without realizing it.

Maybe you keep your purse close to your body because you once had it stolen. Maybe you obsessively check the fluid levels in your car because you once wrecked your engine. And of course you refuse to date anyone who reminds you of THAT ex-boyfriend.

But it isn’t really your friend. It’s more like a buggy software program.

Sometimes it works to protect you from harm, which is great.

But other times it malfunctions. It tells you to remember every rude comment or small disappointment. It tells you that even one rejection is too many; you should just give up dating and spare yourself the pain.

Soon, your life becomes a series of one hurtful experience after another. There’s always something to be upset about. Someone is always cutting you down. You don’t notice the good stuff, because you’re paying so much attention to the bad stuff.

Who wants to live that way?

You can’t turn off the negativity bias, but you can outsmart it.

Recognize that you have an inbuilt tendency to see the worst in any situation. Then counteract it by deliberately looking for the silver lining. Keep looking for good stuff until any negativity seems minor by comparison.

Looking on the bright side, or looking for things to be grateful about, pays big dividends in your love life.

You see, a lot of men are used to being in relationships where their every misstep is identified, catalogued, and filed away in the great archive of “Big Boyfriend Mistakes.”

That archive gets pulled out every time a similar transgression occurs. “You did it AGAIN!” he hears his girlfriend say. “One more time, Buster, and we are over.”

He ends up feeling like he can’t afford to make a mistake. And that closes down his spontaneous, fun-loving, romantic side.

Don’t let your relationship get trapped in the negativity bias!

Offset that natural focus on negativity with a deliberate focus on what’s good and what’s working.

That doesn’t mean you don’t tell him when something he’s said or done has hurt you, but you also make sure to say something every time he makes you feel good.

One critical comment is disproportionately powerful, so make sure to balance difficult conversations with lots of affection and appreciation.

It can feel as if you’re always saying nice things to him, but that’s the point! Heartfelt compliments never grow old. He feels respected, and that’s the secret to winning his heart.