Home > Dating > The Most Important Thing for Real Romance

The Most Important Thing for Real Romance 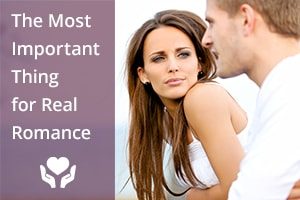 Has a breakup ever caught you totally off guard? Sometimes we see them coming, and sometimes we just don’t.

One woman I spoke to recently said, “I was hoping things would work out, but the writing was on the wall. When it ended, I don’t think either of us was surprised.”

Within a couple of days, a different woman told me, “I just wish I’d been prepared. I really thought things were fine. When he said he didn’t want to be with me anymore, I was floored.”

Both of these women are smart and mature. One knew where her relationship was, and one didn’t.

Said another way, one of them knew how to accurately assess the state of her own relationship. That’s a vital skill—and fortunately, one you can learn.

And it’s not just vital when it comes to the possibility of breaking up. It’s vital for every stage of a romance.

Either way, you can take steps to make sure your needs are met and you’re pursuing what makes you happy.

So how do you check-in on your own romance? There are a lot of ways to gauge relationship health, but you only need three questions to get to the heart of the matter quickly.

The first question has to do with a gut-level feeling…

Do you feel tuned in with him?

It’s knowing what kinds of surprises he does (and doesn’t) like. It’s him knowing how to compliment you in meaningful ways. It’s both of you communicating seamlessly with a wordless sort of connection.

You both know where the other is emotionally, even if no one is saying anything.

Why this is important: Being tuned in to each other is a sign of true intimacy.

No one wants to feel like a consolation prize. But figuring out if you really matter to him can be tricky.

Here’s what you shouldn’t do. Don’t set him up with some kind of test.

If you push him to ditch his plans with friends to do something with you, for example, that’s not really an accurate measure of how much you matter. He may say no to you, not because you don’t matter, but because he wants to keep his word with his friends.

Instead, just pay attention to how he schedules his time, how committed he is to listening to you, and what kinds of choices he makes when other priorities pop up.

If he consistently takes your needs and desires into account, then you matter.

Why this is important: Feeling like you matter to him is a sign that the relationship is a priority for him.

Do you feel sane around him?

Are you familiar with the term “gaslighting?” Gaslighting happens when one person makes another person question their understanding of reality.

Okay, that sounds dramatic—and it can be. In fact, gaslighting can be a sign of emotional abuse. But mild forms of gaslighting are more common than you might think.

Consider this scenario. The guy you’re out with flirts with the waitress. You call him on it, but he says he was only being nice so that she would provide good service. The “real issue,” he says, is your paranoia, not his behavior.

Gaslighting is a significant red flag. He should always treat your feelings like they’re valid—because they are. He has a right to see things differently, but not a right to make you feel bad for expressing your views and perceptions of the events unfolding between the two of you.

And I’ll be candid with you. I kind of hate to even include this question. But I’ve seen enough gaslighting to know it’s a real problem.

On the other hand, I’ve seen plenty of evidence of good, respectful guys who don’t play these mind games. You deserve one of those guys.

Why this is important: Feeling like he doesn’t devalue your emotions is a sign that he respects you, your feelings and your priorities.

Pulling it all together.

The level of intimacy (being tuned in), priority (mattering to him) and respect (he validates how you feel) are reliable indicators of your relationship’s health. If any of those areas are just a little off, then you know what to work on to make your relationship stronger.

And if even one of them is way off, this probably isn’t the guy for you.

You deserve it all—respect, someone who makes you a priority, and someone who genuinely gets you.

Don’t settle. The romance of your dreams is out there.