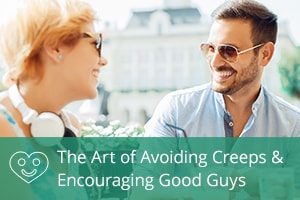 Mia had a unique problem.

“The only guys who talk to me are the creepy ones,” she told me. “I try to end it pretty quick, but it’s getting frustrating. What am I, a creep magnet?”

She gave me a look. “You know. A weirdo. Someone who approaches me somewhere completely inappropriate, like a convenience store, and then won’t leave me alone even when I brush him off.”

“The first thing you need to know is that it’s not you. You’re not sending any subliminal signals that only creeps can decode.”

I’m often struck by how easy it is to take other people’s behavior personally. You might think that you did something to make someone act a certain way, when really it had nothing to do with you and everything to do with them.

Here’s an example. A man sees a woman sitting alone at a café table, reading. She’s pretty, she’s not wearing a ring, and she seems sad. He gathers up his courage and walks past her table. “Looks like an interesting book there,” he remarks.

She snaps the book shut. “Not interested,” she says curtly as she gathers up her things. She’s out the door before he’s had the chance to blink.

In his mind, he just failed. There must be something so wrong with him that a normal, otherwise friendly woman would reject him out of hand.

But maybe how she responded had more to do with her than him. Maybe she’d just lost her job. Maybe she’d already been approached by two other guys that morning and she’d had enough. Maybe she was in no mood for company. Who knows?

What we do know is that men and women don’t always know what’s going through each other’s minds. They make assumptions. And sometimes, those assumptions are wrong.

“The next thing you need to know,” I told Mia, “is something about what it’s like to be a man.”

Although men and women are equals in most areas of life, gender roles are alive and kicking in dating. Men are still supposed to make the first move. That’s their job.

It’s tough. Guys who put themselves out there must get used to rejection. It comes with the territory. Some men do better than others. They can read a woman’s signals and sense whether she’s open to being approached.

But not all men can.

Some men can’t read women at all. Because they’re not sure why some women say yes and other women say no, they approach every woman they can. They treat it as a numbers game.

Think of these guys as spammers. They strike up conversations anywhere, anytime, in the hope they’ll get a bite. They don’t just target women like Mia. As long as a woman is female, she’s fair game.

So what do you do when you get targeted by a spammer?

And how do you distinguish between him and a genuinely good guy hoping to make a connection?

I urged Mia to consider that rejection might be an art in itself.

Before responding to anyone who’s approached you, tune into your creepometer. Don’t laugh—you know you’ve got one! It’s a gut feeling that tells you whether this guy is bad news or not.

If your creepometer isn’t giving you a warning, then why not respond back? Consider it practice. Making small talk with strangers isn’t easy, but it’s an important skill.

Here’s another reason to give the guy a chance. You may not be interested in him in the slightest, but every guy in the vicinity has just seen what happened. Men are much more likely to approach you when they’ve seen you react in a friendly way to some other random guy. They see you’re approachable, and it piques their interest.

Now, what if your creepometer is pointing to the red?

That’s why mobile phones were invented. 😉

An easy way to let a creep down gently is to grab your phone and call someone. Even creeps tend to respect the urgency of a phone call. However, if he persists, at least you’re on the phone with a friend who knows where you are and if you need help.

Men who won’t leave you alone can be scary. If you can’t get hold of a friend on your phone, just glance at him and say, “Excuse me,” and head somewhere else without explanation.  You don’t owe an apology or an excuse to go about your business.

Don’t waste energy trying to hide from the weirdos of the world.  Just plan ahead to use your assertiveness skills if one of them shows up in your path.

Don’t let bad experiences deter you from being the open and positive person you want to be. Trust your creepometer. Good men are out there.