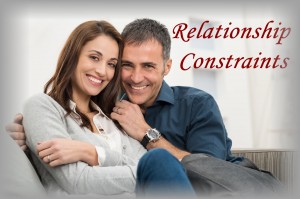 Any time you hit a brick wall and lose momentum, there’s a good chance you have run up against a bottleneck, a constraint that holds back your progress. When you find ways to remove those constraints, it becomes possible to make a lot of progress really fast.

The key to removing relationship constraints is to identify the constraints.

Jessica owns a small salon. She built the business on her own from the ground up. At a few years in, she’s done well. Until recently, that is.

Her client schedule is booked solid. In fact, she also has a waiting list. She’s hit a critical point of growth. She can’t manage it all on her own any more. A bottleneck has formed. The bottleneck is the limited amount of time she has in a given work day.

In business, the “theory of constraints” focuses on identifying the one thing that’s holding back a company from growth. After hiring a few people, Jessica may successfully prevent herself from being a bottleneck that slows company growth. But then she may face another bottleneck. Once she has plenty of employees, the bottleneck (the constraint) might be the limited number of work stations available in the space she is renting. In that case, putting some time and money toward a larger space to rent would remove that bottleneck and allow the business to thrive even more.

Relationships can be held back the same way.

Think about your current relationship. Ask yourself, what seems to be holding you and your partner back? What stops you from spending more time together? What prevents you from having more exciting or enjoyable dates? What gets in the way of making time to sit and talk?

Can you spot any restraints?

When you spot one, don’t freak out. Every relationship experiences growing pains. One bottleneck isn’t the end of the world. Instead, remember that this is normal, and let your mind think outside the box. Get creative. Try to generate as many possible solutions as you can. Think of ways you can reduce or completely eliminate that constraint.

By learning to find and eliminate bottlenecks in your relationship, you can create some amazing breakthroughs. Instead of spreading your efforts thin, focus on removing bottlenecks.

Don’t let one problem area hold you back. Get rid of the bottlenecks in your relationship and watch it thrive.