Introducing “The Butterfly Method” to Survive the Storms in Your Relationship 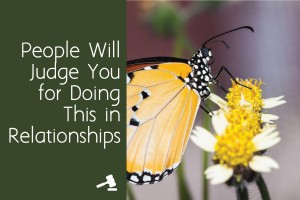 People will judge you for trying hard.

I did it just the other day. I was standing in line at Walmart. The line was moving slow, and I couldn’t help but notice something.

Walmart had invested in 30 cash registers, yet only two of them were open.

I snickered at how stupid Walmart is. Then I remembered something.

I’m standing in line because they accomplished something difficult. They managed to give me the best price in town. And still make a profit.

Maybe they’re not so stupid.

Maybe having only two cash registers open helps them keep prices down.

They try hard. I have to admire that.

But a lot of “cool people” snicker at those of us who try hard. Giving up and being pessimistic is cool to these people.

Sorry, but that’s not my definition of cool.

Cool is the boyfriend who still holds doors open, tells his girlfriend she’s beautiful, and offers to carry things for her while showing respect. Those are real men. They try hard.

Don’t be afraid to try hard. You’ll attract the kind qualities you build up in yourself.

If you want a man who will try hard, someone who will overcome obstacles in the relationship so he can keep loving you, then look for this one quality: Rejection of cynicism.

But should you always try hard?

They say life is a balance between holding on and letting go.

Caught in a windstorm, a butterfly may have to release its grip on the branch it was clinging to. Or else its wings could be torn off by the intensity of the wind.

The butterfly must go with the flow. Allow the wind to take control. Stop resisting.

But that’s not the same thing as giving up. When the wind dies down, the butterfly can resume its journey.

I was amazed when I first learned that monarchs migrate thousands of miles each year to gather at a specific location in Mexico. They seem too delicate for that long journey.

But somehow, they manage. Apparently, they try hard. One day life might blow them off course. The next day they’re moving toward their goal again.

Trying hard says something about you. It says you value something. Something is meaningful enough to be worth your effort.

You’re not too cool to embrace something good… even if it’s hard to achieve it. Even if you fall on your face a few times.

Even if you sometimes have to let go and let the wind blow you off course for a while.

Relationships are among those things I value. I think it’s worth trying hard to have a brilliant relationship.

If you read my blog, you probably agree. And in my mind, that makes you special. So I encourage you to look for a man who shares that special quality.