Home > Dating > Not Sure If He Likes You?

Not Sure If He Likes You? 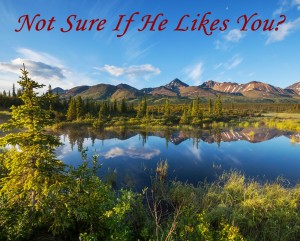 It’s a common scenario. You like a guy. There’s been some interaction, but you can’t tell if the feeling is mutual. You flirt, sometimes with success, but you’d really like to know if you’re wasting your time. Does he like you back or not?

When that happens, the absolute best thing you can do is fake it. That’s right. Make the assumption that he does like you instead of trying to read between the lines.

Most women, and men for that matter, take a different approach. They play the role of detective, using vague clues to try to ferret out the other person’s feelings. That’s a bad idea.

Think about where your mind is when you play detective. It’s centered on self-doubt. You’re working off the assumption that he doesn’t like you and looking for evidence that you’re wrong. It feels like a safe option. After all, no one wants to assume they’re liked only to be let down. Unfortunately, you end up working against yourself.

The problem with this approach is that it plays to your insecurities. Assuming the best gives you confidence when you interact with him. He’ll find it alluring and fun. But if you’re constantly worried about whether or not he likes you in return, you’re chipping away at your “natural” way of interacting.

The result is that you simply don’t put your best foot forward.

Instead of worrying about how he feels, focus on the fact that there are many attractive things about you. Assume he sees you for all your good qualities. Basically, tell yourself he already likes you. You don’t have to take on the role of the pursuer. There’s no need for you to ask him out or to flirt shamelessly. Just tell yourself privately that he’d be nuts not to like you.

When you do that, something incredible happens.

You gain a crazy amount of confidence. Rather than coming off as needy or insecure, you project the image of a woman who knows who she is and why she’s desirable. This dramatically increases the chances that he’ll see you as attractive.

Instead of playing detective, adopt the mindset that he already likes you. You stand a better shot at creating the reality you want!

Psychologists call this a self-fulfilling prophecy. At its heart, it’s faking it ’til you make it. It may feel a bit like psychological hocus pocus, but it works.

And what if it doesn’t work?

Well, part of the key is not waiting around forever for one guy, and not putting all your eggs in one basket at this early stage. Just keep hold of your confidence and keep moving.

The vast majority of men find themselves drawn to women with confidence. Be one of those women by affirming your own attractive qualities and assuming that the guy you’re interested in is also interested in you.

After all, you have a lot to offer the right guy. Focus on that instead of self-doubt.