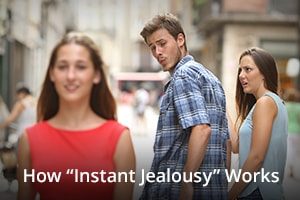 Have you ever experienced this?

You’re with your guy in a public place. A restaurant or the mall. A woman walks by. Before you even glance at his reaction, you’re seething. She’s gorgeous. A part of you is immediately jealous.

Then you see your guy’s face. His eyes are locked on her. Now you feel even worse.

That seed of jealousy sprouts to a full-grown emotion in a heartbeat.

Jealousy doesn’t usually work this way.  It’s usually a suspicion or slight uneasiness that takes weeks or months before it gets labeled as a problem situation.

But “instant jealousy” is a gut feeling. It’s something that springs up out of nowhere when you don’t expect it.

The problem with instant jealousy isn’t that it happens. It’s that it catches you off guard.  So, you might react before you think.

For some women, that means calling their guy out. “I saw you looking at her!” Others might turn passive aggressive, refusing to say why they’re upset but making it clear they aren’t happy. Still others will pout, feeling defeated by the fear that their man will chase after some random eye candy.

But here’s the thing about instant jealousy. Studies tell us it rarely leads to accurate conclusions.[i]

When you get a spontaneous gut feeling that your guy might be into someone else, the last thing you should do is trust that gut feeling. It’s almost never right.

But because those feelings are strong, you need a strong strategy to fight back. Here are three things you can do to stop instant jealousy in its tracks.

Most of the time, instant jealousy wilts as fast as it bloomed. If some random woman in the mall catches your guy’s eye, he won’t even remember her 10 minutes later. By then, you’ll be browsing in another store, having fun with your guy.

But only if you keep it to yourself.

If you’re having a hard time letting instant jealousy go, attack it with facts.

Simple questions work wonders here. For example, who is your guy with? (You.) Does it make sense for him to be dating you if he doesn’t find you attractive? (Nope.) Even if he noticed some other girl, who’s he leaving here with? (You, again.)

Just because your partner finds someone else appealing, that doesn’t mean he’s plotting to leave you. It just means he’s a bit insensitive to how his ogling will affect you.

After all, you’ve noticed cute guys since you started dating, right? But you’re smart enough to avoid gawking at them!

Finally, replace any residual fears with something good.

As soon as you push instant jealousy out of your mind, it’ll leave behind a blank space. Fill that space with positive thoughts about your relationship and your guy.

Think about how he made a big deal out of your birthday. Or the way he cheers you up when you’re having a rough day. Or even small things, like the fact that he held the door open for you on the way in. 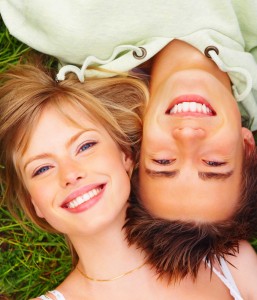 Jealousy, even the instant kind, makes us blind to the good things about our partners. So, make it a point to remember why you’re with him.

Instant jealousy is totally normal. Practically every man and woman feels it.

But instead of acting on this particular gut feeling, fight it. Keep instant jealousy to yourself, test it with facts, and replace feelings of fear with positive thoughts.

Do that, and instant jealousy won’t be more than a temporary blip of irritation on your radar.

Keep in mind, this technique is for investing in a good relationship and protecting it from unnecessary negative waves of emotion.  It’s not a replacement for a well thought out discussion of why ogling at other women is disrespectful to you.

You may still need to have that discussion with your guy. Make sure you do it from a position of emotional strength (and without an audience) rather than in a moment of impulsive frustration.