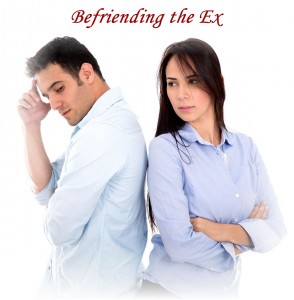 It’s the standard line. Everyone’s heard it at least once, and most of us have actually said it. Sometimes it’s spoken with sincerity, and sometimes it’s just a lame attempt to let the other person down easy. Either way, it means the end of a dating relationship.

“We can still be friends.”

The vast majority of the time, neither party puts too much effort into a post-dating friendship. It’s mega awkward, for one. Also, even if you were friends before dating, it’s hard to work your way back to that place. You’ve been a couple with this person. Returning to the friend zone is no easy thing.

Instead, most of the time, both people go their separate ways. Apart from an occasional social run-in, very few of us try to carve out a permanent spot for an ex in our close circle of friends.

That said, what if you want to? Is it a good idea, or a disaster waiting to happen?

First, you have to think about what’s really good for you. Sure, in the wake of a breakup, you’re likely to feel the void left by the other person. You’re probably used to talking to them daily. You’ve shared your life with them. It’s weird to turn around one day and find them missing. The idea of keeping them in your life as a friend is appealing because you obviously like something about them. Otherwise, you wouldn’t have dated them!

But, sometimes maintaining a friendship is just a way of clinging to the hope that you’ll get back together. That’s likely to take the awkwardness to a whole new level, and that’s definitely not good for you. Maybe you’ll date again and maybe you won’t, but that chance is no basis for friendship.

You have to be realistic.

Becoming friends with someone you dated is kind of like starting all over again. You can’t go back to a pre-dating state. You have to approach the thing like a brand new friendship, starting from scratch.

Often, it’s best to give it a bit of time. The longer you dated, the more time you should allow before you plunge into friendship. The last thing you want is an accidental hookup, and those are easy to fall into when you’ve just broken up with someone. That’s a friendship killer for sure. Also, a fling with a recent ex will mess with your head. Avoid that at all costs.

But, what about social encounters? If you run in the same circles, you’re going to cross paths. What do you do then?

Be nice. You know lots of people you’re friendly towards who don’t hold the title of BFF. It’s not that hard to be polite and friendly without pushing things further than they are ready to go.

After some time has passed, a real friendship is possible with an ex. Be sensitive to where both of you are. If either of you is still hung up on the other, that could make for a tough time. Also, when you start dating someone else, be aware of the fact that they may not do cartwheels at the idea of you being all buddy-buddy with your last boyfriend or girlfriend. You’ll have to approach that carefully to keep it from blowing up in your face.

Friendship is a special thing, and definitely possible with an ex, as long as you take your time and pay a lot of attention to how both of you really feel. Like any other relationship, it’s wise not to rush it. Let it happen in its own time, and err on the side of caution.