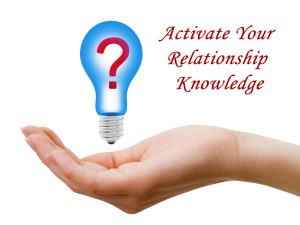 You’ve heard it your whole life: Knowledge is power. This simple phrase is so deeply ingrained in us that we don’t question it. Why would we? It’s one of those things practically everyone accepts as fact.

Consider this common example. You’re in the middle of a disagreement with your partner. It’s frustrating, tense and uncomfortable. You’re certain your perspective is right, and he’s certain his is.

The two of you push and pull, dragging the conflict out. But, at some point during the fight, you see clearly how silly it is. Like most arguments between couples, it wouldn’t even be that hard to stop. One of you just needs to validate the other’s point of view. You could do it, but you won’t get the satisfaction of feeling like you won.

At that moment, you have knowledge. You know how to stop the conflict. However, that knowledge isn’t power because you haven’t put it into action yet.

The only thing knowledge gives you is a choice. You can choose to make a small, sacrificial move and validate him. If you do that, you take control over the situation and bring an unpleasant conversation to a quick and productive end. Or, you can ignore what you know and dig in your heels. If you do that, you surrender the power you could have had.

The only difference is whether or not you act on what you know.

Don’t get me wrong. Knowledge is important. It’s a big deal to realize that validating the other person’s point of view can defuse an argument. But that knowledge is practically useless if you don’t act on it.

This dynamic plays out between couples all the time. It’s not something that just happens when we fight.

The question is this: what are you doing with that knowledge?

I encourage you to spend some time reflecting on what you already know. There are probably things you could do today that will strengthen your relationship and encourage its long-term health. What needs does your partner have that you haven’t met? What would it look like to act on that knowledge?

Knowledge by itself isn’t power. The only way to turn knowledge into power is to act on it. Seize power over your relationship today by putting what you know about your man’s needs into action.