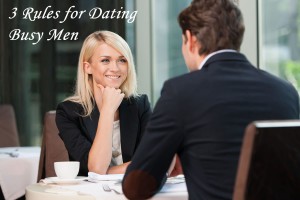 You can spend a lot of time with a guy who still lives in his mother’s basement.

But a guy with a lot of energy and talent makes a better catch. Unfortunately, that kind of man is usually fairly busy.

Lot’s of people (and companies) are competing for his time.

If you want to make things work with a guy who is pressed for time, consider these three strategies. There are dozens more ideas in my mini course on this topic. But I’m leaking these three ideas for those of you who take the time to read my emails.

Rule Number One for Dating Busy Men: Reduce Distractions When Together.

Busy men can be easily distracted. If you want to capture his heart, you need his full attention. You want to reduce distractions from:

2.Electronic devices like TVs in a sports bar, and…

How do you do that? There’s no perfect way, but micro-traditions can help. I’m talking about very simple traditions you invite him to participate in right from the start of your interactions.

For example, you can limit competing time demands by agreeing to see each other just one night a week (say… Thursday nights at 6 PM for dinner) during an introductory phase of your new relationship. You’d be surprised how many busy men will love this idea.

Once he has figured out a time that would consistently work, he doesn’t have to think about it again. It’s like you’ve set up a system that will allow him to gradually get to know you better without the typical feelings of guilt he is used to facing when he realizes he’s gone three weeks without calling a girl he really likes.

Busy guys respond well to repeated but brief interactions. So tell him upfront you don’t expect to go to a movie afterward or talk in a coffee shop till midnight. He’ll appreciate it and his respect for you will rise along with that appreciation.

Rule Number Two for Dating Busy Men: Don’t Bid for His Time, Own His Time.

Again, it’s micro-traditions to the rescue. The faster you can set up a recurring plan for interaction (a micro-tradition), the less you have to compete with other demands on his time. A micro-tradition also means you “own” a timeslot in his week, so to speak. That means your micro-tradition time slot is off-limits to other women who might be competing for his attention.

You may be wondering how TO introduce the idea of a micro-tradition. After all, you don’t want to sound like you’re trying to sell him something. And that’s where rule number three comes to the rescue.

The customer is pleased with you, because they felt like you genuinely listened and tried to help. They walk away with the sensation that they “discovered” a solution. They never felt like you were trying to sell them on anything!

And that’s exactly the system I want you to use. Don’t try to sell him on the idea of forming a micro-tradition together. Instead, use “consultative selling.” Ask him what it’s like trying to find time to date women when he’s such a busy man with so much on his plate.

Once he’s confiding in you, you can suggest a solution to reduce the stress involved in getting to know someone. Heck, you can even volunteer to let him practice on you!