2 Strategies That Can Save the Day When He Pulls Away 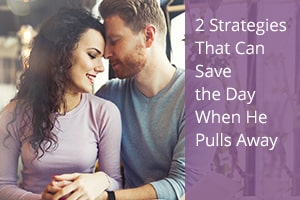 You can feel it.

It’s not just that he’s not contacting you as often. It’s the way he communicates. Almost as if he’s irritated by you. As if it’s a big effort to pick up his phone and text you back.

It hurts because you thought you had something special. You thought he felt it, too. He couldn’t wait to spend time with you. His texts made you smile. You know he was happy with you.

Don’t Push Him Away Even Further

When someone you care about pulls away, all sorts of thoughts go through your mind.

You think it’s something you did. It feels like he’s punishing you. You’re terrified he doesn’t love you anymore. Why do all men end up leaving you? Are you too broken to love?

You can feel the panic building. You’ve got to do something to save your relationship. How can you bring him back? How can you make him act like he used to?

It’s one of the most common dating dynamics:

He pulls away, and you try to pull him back.

But trying to pull him back is risky.

A man may respond to your efforts by pulling away even harder … or breaking free altogether.

Don’t get into a tug of war, where you’re trying to pull him closer and he’s pulling back. Try one of these strategies instead.

If You’re Dating, Let Him Set the Pace

Dating is a weird time in a relationship.

You feel as if you’re getting super-close. The chemistry is mind-blowing. But no one has said anything about staying together forever. You don’t have any hold on him. He could stop calling tomorrow.

For a lot of men, dating serves a purpose. It enables them to enjoy a woman’s company without letting her fully into their lives.

Men are good at compartmentalizing their love lives. Yes, he’s seeing you, but he’s not necessarily thinking about you when he’s with his friends or at work. He can block out parts of his life that aren’t relevant to the task at hand.

But that’s an expectation he may not be able to meet. He’s still got a life apart from you. Your two worlds haven’t merged yet.

In the dating stage, you can avoid pushing him faster than he’s ready to go by matching your communication frequency to his.

Let him set the pace…

And don’t take it personally.

As long as you’re “just” dating, I encourage you to keep your online dating profile active. Keep meeting other guys, even if you’re not really into it.

It gives you a different energy when he’s not the only man on your dance card. He can tell you’re not depending on him to occupy your weekends.

If You’re in a Relationship, Talk about It

But maybe you’re not dating.

Maybe you’re in a committed relationship.

And he’s freezing you out. He’s going cold.

So you look for anything you could do to warm him up again. You send him certain text messages. You dress up in a sexy way. You act understanding.

And he still doesn’t respond.

So you take a risk. You send him a text. “Is something wrong? It feels like we’re growing apart, and I miss you. I want us to be closer.”

And you get a noncommittal reply.

There’s a natural ebb and flow of closeness and separation in even the best relationships. Couples balance time together with time apart, “we time” with “me time.”

But sometimes that balance shifts, leaving one partner out in the cold.

In healthy relationships, you’re able to talk about your feelings with each other. You can say, “Hey, I feel like we’re not hanging out as often! Let’s make more time for each other.”

In fragile relationships, you feel like saying anything will make your relationship implode.

But saying nothing gets you nowhere. And sending him a text is not the same thing as starting a conversation.

So if your guy is pulling back, talk to him in person, face-to-face.

Tell him that you want to talk about how you balance “we time” with “me time.” It feels like you’re spending more time together than apart. What does a good balance feel like to him? How many texts a day feel right?

When you approach him with the goal of getting his input into finding the perfect balance in your relationship, he’s more willing to problem-solve. He can see your point of view.

When a man pulls away, it doesn’t mean you’ve done something wrong.

It may not even mean your relationship is in trouble.

But if you react with fear, you might push him away further.

So try to see the shifting tides of separation and closeness as a natural thing. Your goal is to find the right balance.