Why He Loves It When You’re Selfish 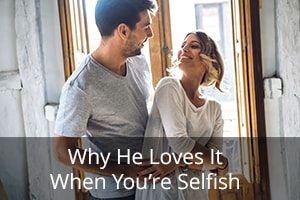 They require sacrifice, compromise, and putting each other first.

We know this deep in our bones, and yet…

It seems like the answer would be to have a stern talk with the person who’s being selfish.

But I have an unusual suggestion:

Maybe the person who’s always selfless should start being selfish once in a while.

As she learns to be more selfish, their relationship ends up balancing itself out and becomes better than ever.

How in the world does that work?

Let me guess. You want to know because you’ve been the one doing all the giving. You know what it’s like to feel taken advantage of. You don’t want a repeat.

You might think the solution is to pick a less selfish man in the first place. If you could find a man who was giving like you, you’d be set. You’d both serve each other, and your relationship would be paradise.

But another option—the better one—is to prevent your relationship from getting imbalanced in the first place.

Relationships tend to get polarized.

He’s tidy, she’s messy. She’s the organizer, he forgets everything. He’s on time, she’s late. She’s the strict parent, he’s the permissive one.

This polarization happens even if couples start off fairly well balanced.

Let’s say that, in your relationship, you’re the tidy one and he’s the messy one.

Before getting together with him, though, you didn’t see yourself as a particular tidy person. You’re just tidy compared to him. He keeps things clean enough to suit him, but he’s no Mr. Martha Stewart.

Over time, that small difference grows. You clean the house; he messes it up again. He doesn’t see why he should do any cleaning when you do such a good job of it. He notices that it seems to give you pleasure to keep things tidy, so why should he deny you the fun?

You end up frustrated and feeling used. You don’t like feeling like his maid! He couldn’t survive without you making sure he has clean underwear. He doesn’t think of anyone but himself.

What’s the answer to this problem? Handing him a mop?

To answer that question, let me tell you about something called The Shadow Effect.

We have a tendency to assign bad traits to other people and good traits to ourselves. That’s why we never feel that we’re being selfish, while we can see rampant selfishness in others.

But what we’re doing is projecting our own shadow traits onto other people.

As long as your partner is the selfish one in the relationship, you’re not. His selfishness keeps you in the selfless role.

But you are selfish. We all are! Selfishness is part of the human condition, along with messiness, forgetfulness, tardiness, weakness, and every other trait you can imagine.

Tired of having such an unbalanced relationship?

Then try some selfishness on for size.

Find that place in yourself that wants to say no to other people’s requests, just so you can come home early and have a long hot soak in the tub.

Find that place in yourself that wants to have what you want for dinner, instead of always letting him decide.

Find that place in yourself that is bold enough to say, “I’d really love it if you would do X for me,” instead of waiting and hoping he’ll guess it on his own.

Do some things for you every now and then.

Will that make you a selfish person?

No. It will just make you less resentful. And it will bring balance to your relationship.

Your partner, freed from the shackles of being the selfish one in the relationship, won’t feel judged anymore.

You’ll start to see that the relationship feels better to both of you when you give him opportunities to serve you and let him know how much you appreciate it.

You’ll begin a new dance, where both of you give and receive without keeping track.

Balance is a beautiful thing.