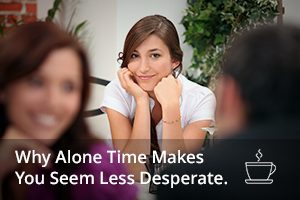 Have you ever spotted a solo diner at a restaurant?

Maybe you were out with some friends or on a date. Just a few tables over someone sat alone. You watched them for a while, stealing discreet glances when you could.

What’s their story?, you wondered. Why are they here ALONE?!

Once you see that table for one, it’s kind of mesmerizing. You might feel bad for them. We often assume someone eating alone doesn’t have the option of company.

But I’ll let you in on a secret.

Those lone diners? They’re probably enjoying life more than those of us afraid of venturing out without constant companionship.[i] They might even have healthier relationships than you!

Why? Because the fear of doing things alone creates desperation. And desperation is bad for your relationships (both romantic and platonic).

People can sense desperation. It introduces “obligation” to the dynamics of your relationship. Obligation to be there for you since you are needy.

It makes you needy whenever you want to venture out and do something fun. You’re desperate for company. Don’t be like that. Independence is healthy in small doses.

It sounds unsettling or depressing to think about doing some things alone. Especially things we think of as social activities, like eating out or going to the movies. But if you always turn down solo activities, you’ll miss out on a lot.

You can’t always count on company for life’s little adventures.

What’s more, as one article put it, “research suggests we’re terrible at guessing how much we’ll enjoy things on our own, and it holds us back.”[ii] People consistently underestimate how much fun they can have by themselves.

I’m not a big fan of missing out on worthwhile experiences, and you probably aren’t, either. So here’s how to go it alone from time to time and get the most out of life.

Whether you’re single or dating, it’s GOOD to branch out sometimes. Your social connections should never be a crutch that keeps you from independence.

Fortunately, it’s really easy to guard your “me time” no matter your relationship status.

If you’re single and there’s something you want to do, DO IT.

Go to a museum. Check out that restaurant none of your friends care to try. See a movie all by yourself.

Don’t sit around waiting for Mr. Right to come along and offer to join you. And don’t shelf every option your friends aren’t interested in.

Once you’re out there, you’ll meet new people (maybe even a guy), or you’ll have a great time all by yourself. Solo activities seem intimidating, but they typically end up being quite enjoyable.

When you’re in a relationship, the default setting is to do everything together. Makes sense, right? You love spending time with him.

But you should still make it a point to carve out some alone time, too.

The occasional solo adventure will keep you feeling independent, which is a very good thing. Plus, time together always means a little more after time apart.

Even if you don’t have a specific activity in mind, plan an afternoon to just be alone. Run some fun errands. Grab a book and head to the park. Take a nice, long, slow walk.

The people who get the most out of each and every day are the people who are just as comfortable on their own as they are with someone else. Being one of those people is totally worth it.

Cultivate an appreciation for “you time” by indulging in it on occasion. It’ll make you a happier person, and it will have a positive impact on your relationships.