Home > Dating > When You’re Tired of Waiting on His Promises

When You’re Tired of Waiting on His Promises 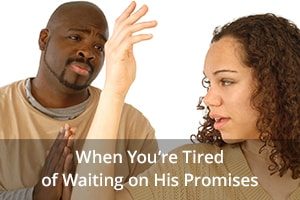 Has this ever happened to you?

He swears he’s in love with you. He wants you to have a future together. He makes a promise to you.

He’ll delays telling his friends you’re his girlfriend, promising to do so when the timing is better.

He’ll find a place for the two of you to live together as soon as his lease runs out. He’ll propose as soon as he has the money for a ring.

So many promises. So much hope.

Weeks pass. You mention his promises. He swears to you that he’s onto it. You just have to be patient.

Months pass. You mention his promises. He tells you to stop nagging him. You need to trust him.

A year passes. You stop mentioning his promises. Somewhere deep inside, you know the truth. He never intended to live up to his word.

When you’re in that situation, it’s hard to know what to do. You want to believe him so much. This is the man you want a future with, after all.

But you can’t deny the evidence. You can see that he’s done nothing.

Living in limbo is painful. You want to move forward, but he’s holding back. You don’t know why, and you’re not sure if you want to know why. You may learn something you wish you’d never learned.

When a man’s words don’t match his actions, you have a few options:

Here’s what I think of each of those options. I’ll finish by telling you what I’d recommend, and why it will bring you closer than ever.

Option #1 has its pros and cons.

Giving your loved one the benefit of the doubt is a good idea. It’s one of the qualities that make relationships last. Couples who don’t automatically assume the worst of each other do better than couples who jump to conclusions about each other’s motives.

But, when you’re in a new relationship, you don’t actually know what his motives are. You don’t know him well enough yet. So you might do well to be cautious.

Option #2 is problematic. If he’s promised to do something to move your relationship forward, then it’s not your responsibility to remind him. Nagging him can backfire. He might feel that you don’t think he can do it by himself. He’ll dig his heels in even further.

Option #3 can work in some circumstances, but I don’t recommend it. If there’s one person you don’t want to have to play games with, it’s your future husband.

This is a very popular strategy, though. It gives you a feeling of power. It satisfies the part of you that thinks he should pay for not following through on his promises. Some experts recommend it as a one-time thing. If the threat of losing you gets him to finally “put a ring on it,” then surely it can’t be too bad.

My view is that:

The way you start a relationship should be the way you mean to continue.

That’s why I recommend Option #4, talking to him about it.

Honesty takes guts. It’s scary to ask your loved one a question when you’re afraid to hear his answer. But if you can summon up the courage to ask, and the courage to listen non-judgmentally to what he has to say, then you are so far ahead of most couples.

That’s how successful teams work. They don’t blame each other for not moving the project forward. They don’t play games. They use frank, honest talk to get clear about what needs to be done and what’s holding it back.

He’s on your team. Talk to him.