Home > Commitment > When You Can’t Respect the Man You Love, Try These 3 Tips

When You Can’t Respect the Man You Love, Try These 3 Tips 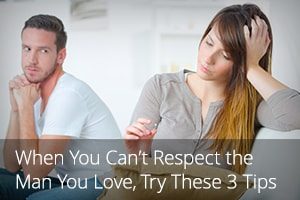 I’d been watching Amanda and Jason struggle for some time.

They’d always seemed like such a strong couple. They started dating in college and moved together to Chicago to start their respective careers. Although they weren’t married, they’d been together longer than many married couples. It would be 10 years next May.

But Amanda’s career had flourished while Jason’s flagged. He’d gotten laid off three months ago. Amanda’s income was enough for them to survive on, barely.

I bumped into them a while back at a social gathering. I could immediately see that the stress was getting her down. Amanda had lost even more weight off her already slim frame. She couldn’t seem to stand still.

Jason, on the other hand, seemed more relaxed than ever. Amanda told me he was spending his days in sweatpants on the sofa, playing video games.

Jason was in good form that night, holding court about the time he won a bowling tournament. When he finished his story, everyone laughed but Amanda. “Because winning at games makes you a real man,” she whispered theatrically to her girlfriends, rolling her eyes.

Instinctively, I glanced back at Jason. If I hadn’t been fast I wouldn’t have caught it: the way his lips tightened and his head shook almost imperceptibly.

Amanda and Jason were in trouble.

It’s not my place to advise my friends about what they should do in their relationships, unless they come to me and explicitly ask. I hoped Amanda would ask. Two weeks later, she did.

She called to complain about Jason. He still hadn’t found work. What could she do to light a fire under him?

“You may not like my answer,” I told her. “Are you sure you want my advice?”

“Of course!” she said. “Anything. I’m desperate. We can’t go on like this much longer. If I come home one more time to see him holding that stupid controller, I just might smash it.”

I told her about the Respect Principle. When you lose respect for the man you love, I explained, he feels it. He withdraws from you. Over time the distance grows, putting your relationship at risk.

“But I’ve been so supportive!” she argued. “I’ve done everything I can to help him and encourage him and make it easy for him. But he does nothing. He just sits there on that stupid couch with his stupid games.”

“So what you’re telling me is that you can’t respect a man you don’t respect?”

“And that’s why he’s not listening to you,” I said. “You can try to motivate him until you’re blue in the face, but it’s not going to do any good.”

The phone went silent. I could hear Amanda take a deep breath.

“You love Jason, right? You want to stay together?”

“Then try a different tactic. Here are the 3 steps I’d suggest.”

Amanda thought her comment at the party was funny, but it was more than that. It was contemptuous. It showed disrespect for her partner in a very public way.

Contempt is one of the four traits that herald the beginning of the end in a relationship (the others are criticism, defensiveness and stonewalling). When you start demonstrating contempt to each other, there’s not much left of the relationship to save.

No more eye rolling. No sarcastic remarks. No making fun of each other. No putting each other down. Refuse to succumb to those things. It’s the loving thing to do.

It’s perhaps the best relationship advice ever given:

Praise what you want more of.

It’s just as true for children and pets as it is for partners.

Don’t waste your time and energy blasting him for failing you. Instead, notice and appreciate each baby step he takes in the right direction. Did he make a phone call? Great. Did he make a stab at updating his résumé? Cheer for him.

He wants to do right by you. It’s just that sometimes he gets stuck. Show him that you see the man he truly is, even if he’s not acting like it at the moment.

When a man can’t provide for the woman he loves, it’s tough on his self-esteem.

All Amanda could see was Jason having fun all day. She didn’t see how worried he was. He was using games to distract himself from what he perceived as his failure.

Amanda could show Jason how much she needed him by asking him to help her with things that “only a man” could do. These tasks would give Jason a sense of purpose and reassure him that Amanda still relied on him.

It’s hard when the man you love sinks into a hole and can’t seem to find a way out. But your respect—even more so than your support—throws him a lifeline.