Home > Commitment > When It’s Time for a Romantic Upgrade

When It’s Time for a Romantic Upgrade 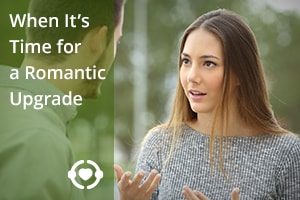 I don’t know about you, but the last month before I upgrade my phone is painful. By then, my old phone feels outdated and sluggish.

It doesn’t have enough storage, can’t really handle the apps I use daily, and, maybe worst of all, it’s just not exciting anymore. More than once, I’ve thought it would be really convenient if I happened to drop it in a lake or run over it with my car…just so I can go ahead and get a new one NOW.

I’m not the only one.

According to a recent study, people tend to embrace more reckless behavior with their phones when they’re looking for an excuse to buy the latest model.[i]

You won’t even risk putting a small scratch on your new phone. But your old phone? Eh, you’ll toss it across the pool so a friend can take your picture. Why not?

Which makes me think of something else. Sometimes we do the same thing with relationships.

I’m sure you’ve experienced this. You’re dating someone, things have gone from good, to stale, to not-that-great. But you’re not quite ready to break up.

So maybe you pick a fight or two. Maybe you’re not as supportive as you’d be otherwise. Maybe you get a little careless with the relationship itself because you’re ready for an upgrade.

While this behavior makes perfect sense, it’s not the best way to handle a dying relationship. It just makes the worst part of dating last longer.

If your relationship is in that not-so-great place, there’s a better way. First, you have to answer a critical question (that I’m about to show you). Then, based on your answer, you should take one of two actions.

When a previously good relationship turns sour, the first thing you have to determine is if it can be salvaged.

Do you have faith in the relationship’s foundation? Is this guy someone you really WANT to be with? Is this phase just a hurdle to overcome?

Every relationship has rough patches. You don’t need to cut bait and run the first time things require work. But you shouldn’t stick around in a relationship that’s never going to be fulfilling, either.

So, which kind of relationship is THIS ONE?

Answering that question may seem obvious, but a lot of people avoid even ASKING the question. We’re afraid the answer will obligate us to action.

Spoiler alert: it will.

But that’s exactly why asking the question is so important. If you’re not happy now, you definitely need to do something. Knowing what you truly want will help determine what you should do.

Once you know your answer, you’re ready for the next step.

If you want to stick with the relationship… 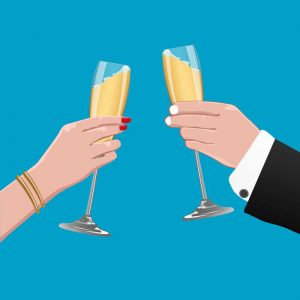 Then it’s time to get to work.

Have a frank but loving conversation with your man. Admit that things haven’t been ideal lately. Emphasize that you care about him and want to get through it.

Then work WITH him to develop an action plan.

A good action plan will require BOTH of you to make some changes. Be sure to nail down what he’s going to work on and what you’re going to work on. Be as specific as possible.

If the relationship isn’t a keeper…

Then it’s time to gracefully part ways and move on.

I want to caution you, though. Don’t be rash.

If you’re unhappy now, it may be easier to imagine ending things than staying together. Don’t rush to any dramatic conclusions. Really think about how you feel. Good guys are hard to find.

That said, as soon as you’re sure a relationship isn’t going to get any better, end it.

Don’t drag things out. Don’t flirt with conflict in the hopes he’ll walk away. Don’t torture yourself by sticking with someone who doesn’t meet your needs.

If you’re not happy where you are, either move the relationship to a better place or move on.

Romantic bliss always takes work. Don’t shy away from doing your part to guarantee your own happiness.

You’re definitely worth the effort!