Home > Commitment > When he clams up, do this.

When he clams up, do this. 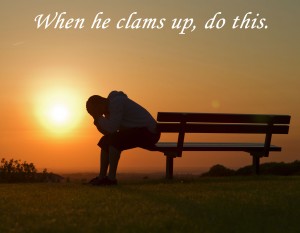 Try as hard as you want, there are times when it feels impossible to get your guy to talk.

You’ve likely been there. You know something is bothering him. You’re sure of it. Maybe you know of a specific issue he’s dealing with, or maybe he’s just being distant. Either way, all the signs are there. He’s got a lot going on in his mind, but he won’t let you in.

If you try to pry information out of him, he doesn’t respond well. When you ask how he’s doing, he answers in a single word: “Fine.” It can be infuriating, and even scary.

If he won’t talk to you, what does that mean about your relationship? Is this a sign that something is really wrong?

The most important thing to remember at those moments is that guys and girls handle emotional stress very differently.

When you’re working through something, you likely feel compelled to talk it out. A lot of women do. Men, on the other hand, tend to wall themselves off. They tinker with the issue in their heads, trying to find a solution to the problem. But they rarely share their thought process by default.

It may sound crazy to you, trying to tackle big issues all alone like that, but many men prefer this approach.

This leaves you in a tough spot. What do you do at those moments? How can you be supportive? How can you encourage your guy to open up? And, just as important, how can you determine if the issue involves you?

First and foremost, don’t panic. Just because he’s not talking to you doesn’t necessarily mean there’s a problem between the two of you.

It may help to understand where he’s coming from. When facing a problem he doesn’t know how to solve, your man feels out of control. That’s a very uncomfortable feeling for a man.

Men don’t like to open up when feeling the vulnerability of having no plan. To try to regain a sense of control, he may opt to seek a solution on his own. When you think about it that way, it makes a little more sense.

Still, what do you do?

Brute force certainly isn’t the answer. If you push him to open up, you’re only emphasizing that he’s out of control. You don’t want to do that!

Instead, you need to find ways to affirm your faith in him while also inviting him to share when he’s ready. Simple statements like, “I’m sure you’ll figure it out,” can go a long way.

Follow that up with, “If I can help, let me know” and you’ve effectively told him two things: you believe in him, and you’re there if he wants to talk.

Just keep in mind that there’s no right way to handle emotional stress. You have your patterns and he has his. Both of you may have to bend a little to accommodate the other. You can help him by voicing support and extending a nonthreatening invitation to share.