Home > Dating > What To Do When Your Guy Lets You Down

What To Do When Your Guy Lets You Down 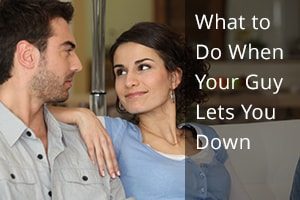 Alaya remembered when she first started dating her husband.

She had to leave for a week on a trip, and he did the most romantic thing. He loaded up his iPod with a special playlist and sent it with her.

She never forgot the song that opened the playlist. It was a man singing about his fear of letting down the woman he loved.

“I believed, from that day on, that his goal in his relationship with me was to live up to the man he knew he could be,” she said. “It gave me great comfort. I trusted him, because I knew he was going to do his best to never let me down.”

They moved, and Alaya’s husband had a hard time finding work in his field. They had their first child, and money was tight.

The man she’d married had been optimistic, loving, and dedicated to being a better man. But now he was sarcastic, sometimes bitter, and increasingly selfish.

“I talked about doing date nights, but he said he was too tired. He would make jokes about fat women, while I wasn’t even close to getting my pre-baby figure back. Where did my husband go? I didn’t even know this man.”

What would you tell Alaya?

Divorce him? Get him to couples counseling? Sit him down and lay down the law?

One suggestion that’s probably not on your list is to tell him how proud she is of him.

But praise works where criticism fails.

To show you how it works, let’s rewind Alaya’s story back to the beginning. Remember that promise her future husband made to her? The promise to never let her down?

What Alaya didn’t realize back then was that his promise required something from her. It was up to her to show him that he hadn’t let her down.

Understand this secret, and you hold the key to keeping your man committed.

A man enters a relationship with the desire to be his partner’s hero. He thrives when he exceeds her expectations. When a man can please the woman he’s with, he feels masculine, powerful, and overwhelmed with love.

In fact, the more she rewards his efforts with praise and gratitude, the more love he feels for her.

It may seem odd to you that love would be tied to performance for men, but think of it this way. When a man does well—whether at work, school, or in relationship—he gets praised. That praise gives him confidence and makes him even more committed to try even harder. It’s a virtuous cycle…

Their life gets more demanding. She asks more of him. He forgets to do what he promised. He fails to meet her needs.

Or maybe she’s consistently loving, but he’s having a hard time getting work. They’re living in a dump. He lies awake at night, brooding.

He realizes he’s broken the promise he made to himself when they got together. He’s letting her down. He’s failed.

To protect himself, he does the one thing she doesn’t expect:

He pulls back from her.

He feels unworthy of your love. And when you show him love anyway, it feels like charity. He doesn’t feel he deserves it.

If this goes on long enough, he begins to question the relationship itself. He pulls away emotionally even if he still loves you deep in his heart.

When a man lets down the woman he loves, his ability to love her takes a hit.

If he feels that he’s failed her—even if it’s just in his own head—something changes for him.

He’s less motivated to keep trying in the relationship. He tells himself that nothing he could do would make any difference.

To get her husband back, Alaya needed to take drastic measures.

She needed to set her husband up to win.

When a man is questioning the love in a relationship, your gifts of love won’t move him. But your admiration will.

It’s not always easy to find things to praise about someone who’s treating you badly. It can help to remember this distinction:

His behavior is not who he is.

You can dislike what he’s done while loving the man he is.

So when he lets you down, let him know you haven’t lost faith in him. Praise those things you can praise. Show great pleasure in the little things he does for you.

Remind him what it feels like to be a hero again.