Home > Attraction > What to Do If You Suck at First Impressions

What to Do If You Suck at First Impressions 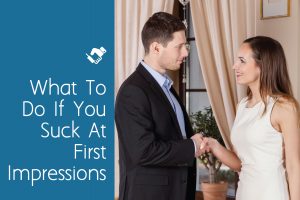 It takes seven seconds to make a first impression.[i]

You heard me right. Seven seconds. We size up other people in a fraction of the time it takes to brush our teeth!

And first impressions are powerful. They’re so powerful that they rarely change. Basically, you get one shot. Blow it, and you’re far less likely to make a connection. A failed first impression will end your chances with a guy before you’ve even had time to start a conversation.

In seven seconds, we decide if the other person is someone we want to know better or someone we’d rather just forget.

Actually, it’s not as bad as it sounds. Nailing a first impression isn’t that hard. In fact, you only need one trick up your sleeve.

When two people meet, the first question they ask about the other is, “Can I trust you?”[ii]

If you’re surprised by that, you’re not alone. A lot of people assume that confidence is the key, especially when it comes to dating.

Here’s the funny thing about that. People who project confidence without seeming trustworthy are typically disliked. Instead of being approachable, they look arrogant.

If you want to give a good first impression, you have to project a sense of trustworthiness before anything else.

And here’s where things get dead simple. Giving off a trustworthy vibe is EASY. It’s all about being present in the moment. That’s it.

It starts with your body language, including your tone. Be friendly, open, and welcoming. Smile, especially when you say his name.

After exchanging names, let him talk first. If he hesitates, ask a question and then really listen to his answer. Make sure he knows he’s your focus. This is a great time to practice active listening by using a couple of follow-up questions.

Oh, and put your phone away.

Seriously, don’t even try to sneak a peek at it. Nothing kills trust out of the gate like sending the message that you’re more into Instagram than the human being standing in front of you.

Of course, a solid first impression doesn’t guarantee the next guy you meet will be the One. But it’s still critically important. Without a good first impression, it’s not likely the two of you will get to know each other well enough to test the romantic waters at all.

So the next time you meet a good looking guy, make yourself unforgettable by being 100% present in the moment.

Body language, tone of voice, and genuine active listening are always important. When making a first impression, this stuff is the difference between flopping and knocking his socks off.