Home > Commitment > What’s He Not Telling You? Learn to Hear What Isn’t Being Said in Your Relations

What’s He Not Telling You? Learn to Hear What Isn’t Being Said in Your Relations 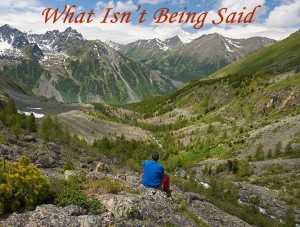 Peter Drucker, the well-known business guru, once said, “The most important thing in communication is to hear what isn’t being said.”

In other words, you have to know how to read between the lines.

That’s true in any situation where two people interact, and it’s especially true in romantic relationships. Why? Because so much of communication is what the other person isn’t saying.

If you only pay attention to what the man in your life says, you’re missing a lot of what he’s communicating with you!

With practice, you can hone the skill of reading his unspoken thoughts. But how do you practice? By getting feedback.

When you’re in a conversation with the man in your life, notice how he says it. How is he sitting? Is his posture relaxed or tense? What about his tone of voice? What is his facial expression? And don’t stop there.

That was the easy stuff you probably already notice without even trying. But let me challenge you to go further. This is someone you know well. If you use your imagination, you can probably make some fairly accurate guesses about what he’s feeling.

This is the hard part. But if you use my formula for success, you can get feedback that’s guaranteed to hone your skill.

Instead of jumping to conclusions, talk to him about what you read between the lines. And do it without making him feel like you’re psychoanalyzing him. No one likes to be under the microscope!

The easiest way is to just ask questions. For example, “Are you feeling worried about that?”

If he wants to know why you’re asking, just explain that you imagine that’s how you’d feel. That gives him a no-pressure opportunity to clarify his feelings. And you get a little bit better at reading between the lines. Getting feedback gradually improves your skills for reading the unspoken communication.

It’s important that you approach this with humility, especially at first. You may be wrong. A lot. Don’t let your ego get wrapped up in correctly predicting what’s going on inside his head. Think of this as a learning opportunity that will pay off later.

Over time, you’ll get really good at hearing all of what he’s communicating–what he says, and what he doesn’t say. As that happens, the lines of communication will open even wider. He’ll feel understood on a profound level.

Women who master this skill end up in relationships with men who aren’t afraid to share their thoughts and feelings.

The key is recognizing that you’re already reading between the lines, just like everyone else. Instead of doing it without giving it much thought, make it a habit to do it with intention. Talk to him about what you hear that’s not being said, and learn from the times when your conclusions are both right and wrong.

No one has a crystal ball. You’re not going to become a mind reader. But you can get better at bypassing the male tendency to be less expressive verbally. With practice, you can develop the skill of hearing things that would be easy to miss.