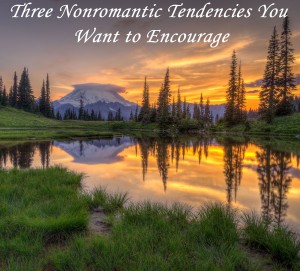 No, the title isn’t a typo.

It may seem counter intuitive, but some of the non-romantic things guys do signal that your relationship is actually moving forward. When he does one of the following three things, don’t discourage him.

What he does: Act protective of you.

You’re not helpless. 99% of the time you don’t need a protector. But there will still be moments when a guy goes out of his way to defend you. Sometimes it shows up in an annoying form, like trying to help you with something you’re pretty good at.

What it means: He’s invested in you.

You may not be a damsel in distress, but do you really want to stop him from playing the role of prince charming?

When he comes to your aid, he’s not making a statement about your ability to be self-sufficient. Instead, he’s doing it for the same reasons you’d go to bat for a friend. Because he cares.

What he does: Include you in his adventurous play.

You may not be into sports or the outdoorsy type. It’s entirely possible that you don’t care at all about hunting, fishing, football or Frisbee golf. And yet, he keeps trying to pull you in.

What it means: He wants to share the things he likes with you.

Think about the last time you experienced something that moved you. A book, a movie, or a conversation with a friend. You probably had the urge to share those positive feelings with someone else. He feels the same urge.

Okay, so you’re never going to live and breathe football. That’s fine. Still, make the effort to be open to the things he’s passionate about. He wouldn’t bother sharing them with you if your relationship weren’t headed in a good direction.

What he does: Stops trying to impress you.

When the two of you first met, he was all about putting his best foot forward. He was careful to avoid doing things that might put you off. His manners were impeccable. He’d watch whatever movie you picked, eat where you wanted, and plan elaborate, romantic dates. But as the relationship progressed, he stopped trying so hard.

What it means: He wants to build a genuine, lasting relationship.

No one can keep up the pressure of trying to impress all the time. It’s too much work. At some point, our comfort levels rise enough that we drop our guard. We let others see us for who we really are. Even the bad stuff.

Instead of putting on a show, he’s letting you see who he really is. He’s being himself. You want to encourage that by letting him know you’re comfortable with him, too.

Sometimes non-romantic things mean your relationship is headed in the right direction. When you notice him doing these three things, don’t flip out. Instead, read between the lines.

When you see what he’s really telling you, you’ll want to encourage the occasional lack of romance. After all, it means he’s serious about you.