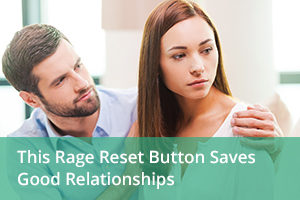 When was the last time you were upset? I mean REALLY upset.

Like Stacy. “It was like there was liquid anger in my veins,” she said. “I was so mad.”

Her boyfriend canceled their anniversary dinner because he thought the timing was “inconvenient” for his work schedule. She can remember what it felt like to this day.

Thankfully, she wasn’t able to confront her guy about it right away. It was a weekday and both were at work. She had to wait hours before she had a chance to talk to him.

During that time, she calmed down.  That allowed her to think clearly about the best approach for the long-term health of the relationship.

Was she still upset? You betcha. But the intensity of her emotions leveled out. Instead of speaking from raw emotion, she was able to effectively communicate why his decision hurt her. And he seemed remorseful instead of defensive.

If she’d talked to him while she was still in the throes of intense emotion, their conversation wouldn’t have been nearly as productive.

Now, back to the last time YOU were upset. How long did it take for the feelings of frustration to fade a bit? Were you livid for only a few minutes, or were you ready to start World War III?

However long it takes you to cool off, going toe-to-toe with your guy (or anyone else) while you’re fuming is never a good idea.

There’s definitely a time and place for strong emotions. It’s appropriate to tell him you’re upset and why. But you want that conversation to move you forward as a couple, not just start a fight.

So when he does something upsetting, it is imperative that you tame those wild emotions BEFORE you try to talk to him.

Luckily, you have what author Karl Albrecht calls a “magic reset button” that can put you in a calmer frame of mind immediately.[i]

But before you can use your magic reset button you have to “install” it. Here’s how.

Your magic reset button can be anywhere on your body, provided it’s a place you can easily touch in a socially acceptable way. For example, you could use your ear lobe, the spot right between your eyebrows, an elbow, or even the tip of your nose.

To “install” your magic reset button, touch that spot and meditate for a moment. Try to put yourself in a peaceful, calm state of mind. You want to banish anxiety and feel in control.

Do that several times a day, each time pausing to return to a tranquil mental state.

Now, when your emotions peak a little too much, and you begin to feel yourself losing control, you can touch your magic reset button. You’ll remember that peaceful state of mind and return to a calmer place.

This is really just an elaborate way of distracting your brain.

Once you disrupt intense emotions, you can return to thoughts about the problem at hand. Hopefully, you’ll be calmer and better able to take appropriate action.

“Appropriate action” might mean letting some things go. And it might mean giving your guy a piece of your mind. It depends entirely on the situation.

But YOU get to decide.  It’s much better than letting your anger decide for you.

The goal here isn’t to squash emotion. It’s simply to keep your emotions from pushing you out of the driver’s seat.

Install a magic reset button of your very own. Practice pushing it while bringing yourself to a calm mental state.

When you really need it, your magic reset button will be there to help ground you.