The Weekend-Trigger: Renew Your Romance 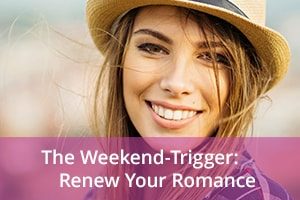 You know how it feels when you first start dating someone? Every detail about them is exciting. The process of getting to know them can be spell-binding.

That’s why you’ll stay on the phone for HOURS, even if you’re not really a long-phone-call kind of person. The beginning is just so charged.

And then things slow down. Which is good, even though it’s not nearly as exciting.

Think about the last time you bought a new car. For a while, every time you slid into the driver’s seat you were elated. Everything was so fresh and different. And who doesn’t love that new car smell?!

But the new car smell faded.

You got used to the controls, the fresh layout, and even the bells and whistles you freaked out over on the test drive. You probably didn’t even realize it was happening, but your new car became just “the car.”

Anything we encounter every day can become dull, simply because we’re used to it. Even romance.

But there’s a way to reboot the excitement, super-charging your relationship all over again. And the solution is probably the opposite of what you’d expect.

I recommend approaching your love life like a Stoic.

If you know much about the Stoics of the ancient world, that probably sounds weird. They weren’t known for being terribly passionate. But there’s one aspect of their philosophy that can absolutely recharge a stale dating relationship.

The Stoics believed (among other things) that the way to appreciate something is to consider what life would be like without it.[i] 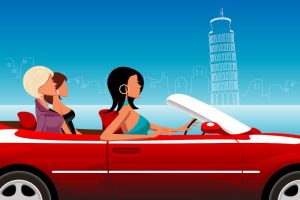 To breathe new life into your relationship, all you have to do is give yourself and your guy a taste of what NOT having each other would be like. And there’s an easy way to do that.

Ditch the dude and spend a weekend with your friends.

Here’s why this works, and why I suggest a full weekend:

1.It works because one evening apart would be too little time.

You want enough time apart that you both feel it. You want him to miss you, and you want to miss him. A couple of days will give you that feeling.

2. It works because you’ll be doing something fun while you’re apart.

A road trip with your girlfriends is a great way to go. You’ll have a good time, but you’ll still find yourself longing for him.

3. It works because you don’t have to tell your man WHY you’re doing it.

Honestly, he doesn’t need to know. Just plan a weekend with friends. Tell him it’s girls-only, and encourage him to do something with the guys.

To get the most bang for your buck, make plans to have a nice evening with him on Sunday night after you get back into town. Suggest dinner in an intimate setting. Go somewhere you two can really talk and reconnect.

Then, have a fun weekend…followed immediately by a magical reunion.

As the saying goes, “Absence makes the heart grow fonder.” Short breaks from each other can really rekindle the passion in your relationship.

If the spark between you and your guy isn’t what it used to be, try spending a weekend apart. You’ll be back to that fluttery feeling of excitement again in no time.