The Secret Message of Loneliness 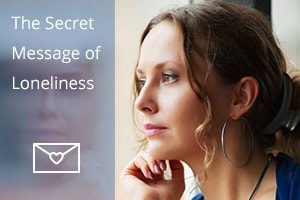 Certain times of year are lonelier than others.

Holidays. Valentine’s Day. Vacation time with no one to spend it with.

Along with the loneliness comes a hot burst of shame.

Shame that you’re even feeling this way. You shouldn’t be lonely. You’ve got your life and your friends. You’re independent! You like your alone time.

Then there’s the other shame…

Shame that no one has chosen you yet.

Shame that, out of all your friends, you’re the one who’s on her own.

That shame, coupled with loneliness, can make you go a bit crazy. You can end up acting in ways that just make it worse.

Society used to try to use shame women using derogatory terms like “slut” or “prude.” But the modern badge of shame goes by a different name:

Perhaps you’ve heard people say—or said yourself about someone—“Man, she’s desperate. You’ve got to feel sorry for her. No one’s going to date someone who’s acting that needy.”

No wonder loneliness feels so shameful.

Admitting you might be feeling the tiniest bit needy is unacceptable. Those feelings of loneliness must be squashed. No one can know you’re feeling lonely. You’ve got to hide it.

But therapists know there’s one thing worse than unwanted feelings:

The more you resist loneliness, the more it sinks down in your bones and refuses to budge.

But loneliness doesn’t have to be your enemy. It can be your friend.

It can be a source of power instead of shame.

Let me share with you a technique to take any unwanted emotion and use it to create your best life.

When most of us feel lonely, we beat ourselves up over it. Something is wrong with us. We shouldn’t feel this way.

But emotions are messengers.

They’re telling us something important. Bringing attention to something we’re overlooking. Reminding us of unfinished business.

So negative emotions aren’t trying to ruin our lives. They are signals advising a course correction.

They’re not proof we’re doing something wrong. Rather, they’re trying to get our attention.

But what in the world are they trying to say?

Well, there’s a method for figuring it out.

Dialoguing with Your Feelings

Your feelings are unique to you. No one else can tell you what’s going on for you.

So don’t ask your best friend what your loneliness means. You’ve got to have a conversation with yourself. You’ve got to talk to your emotions and find out what they have to say.

Start by envisioning in your head what your loneliness would look like, if it had shape and form. What color would it be? Would it be big, small, skinny, round? Give it a voice. Then talk to it.

“Loneliness, I notice you’ve been hanging around a lot. What’s up?”

What do you think Loneliness would say back to you?

If it feels weird to talk to yourself, you can also have this conversation in your journal. Write down the question you want to ask your feelings, then wait until an idea pops into your head. Write it down, and go from there.

The first thing that flashes into your mind is usually the right response, even if it’s not the response you want.

Try to find out what your loneliness is after. What does it want you to do?

You may find it’s trying to tell you that something you’re doing isn’t working.

For example, a client of mine, Sierra, had been lonely all of her life. She’d grown up in an isolated area of the country and kept picking jobs and living situations where she had plenty of personal space. She thought she needed her alone time more than she needed company.

When her loneliness kicked in, she thought it was telling her that no one would ever love her. She wasn’t good enough to deserve a partner. But that was her interpretation of the situation. She’d never actually asked the feeling itself.

Turns out, Loneliness did have a message for Sierra. It wanted Sierra to start spending more time with people. It wanted her to pick up the phone, arrange get-togethers, go out more.

Once you feel you’ve gotten to know your negative feeling better, ask it one final question:

“How can I acknowledge you?”

How do you think you could honor your loneliness?

Giving your feelings acknowledgement and respect is a pretty big deal. It means you’ve shifted your perspective from “shooting the messenger” to extending hospitality. You may not like its message, but that doesn’t mean it didn’t do you a favor.

Loneliness can light a fire under you, and sometimes that’s just what you need.