The Romantic Advantage of Seeing the World in Shades of Gray 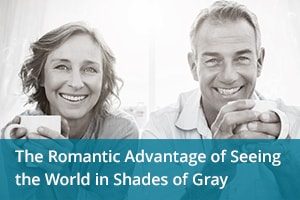 Want to know whether this guy has what it takes to last in the long run?

Ask him about his parents. Or his exes. Or his boss. People who are emotionally charged for him.

Then sit back and listen.

If he paints a world in which people are either good or bad, saints or sinners, then watch out.

He may not have what psychologists call “healthy object relations,” which are crucial for lasting love.

In a moment, I’ll tell you why seeing in black and white can sabotage lasting love, but first, here’s a quick and very basic run-down on the theory.

It’s not until we grow up a bit that we realize our parents are neither good nor bad, but rather complex people with some traits we like and some we dislike.

That’s a mature point of view.

We can see that, even though we may dislike someone heartily, that person still has some good traits.

We can see that, even though we idolize someone, that person still has flaws.

But not everyone has this seemingly obvious insight.

Some people continue to see others in black or white … and that doesn’t bode well for romance.

Have you ever met a man who put you on a pedestal from the moment he met you?

He made you feel amazing. You were the center of his attention. His attachment to you was so intense you felt a bit blown over. You wondered whether he was seeing the real you or wearing some serious rose-colored glasses.

But it was flattering. So you went along with it.

Then, a few weeks into the relationship, or a few months, or even a few years, something shifted.

You disappointed him in some small way.

Maybe you said no when he was expecting you to say yes. Maybe you asked him to change something, and he took it as criticism. Or maybe you did nothing at all. He just woke up one morning and looked at you differently.

From that moment on, you were a disappointment to him. You could never measure up to the woman he thought you should be.

You could try harder, of course. But why would you? In his eyes, you were either the ideal woman or a flawed human being. Hopefully, you left the relationship and didn’t look back.

That’s the consequences of all-or-nothing thinking. A man who can’t appreciate a complex, interesting woman who’s got a bit of saint AND sinner in her isn’t one who’ll stay the course.

Now, let’s turn the tables. How can this theory help you spot a winner?

Ask him about his parents, or his exes, or his boss. Listen closely.

Does he talk about their good and bad sides? If the relationship turned sour, does he admit his role in what happened, or does he blame it all on the other person? Does he work at relationships even when they’re not easy or even satisfying?

That’s good news for you.

Because someday, in your relationship, you’re going to do something he doesn’t like.

If he’s used to seeing in shades of gray, then he’s not going to condemn you. He’s going to make allowances for the fact that you’re human, not some unrealistically perfect robot who never takes a wrong step.

We all disappoint each other from time to time. The longer you’re together, the more opportunities you’ll have to let each other down. But that’s no reason to end a relationship. It’s a reason to celebrate it.

You see, when you let each other down, you have to work things out. By working things out, you become stronger as a couple. So it’s actually productive to make mistakes, as long as you see them as learning opportunities.

The man who sees in black and white will never get the chance to improve his relationship skills, because he’ll end relationships as soon as he feels let down. Or else he’ll just make you feel miserable (often in passive aggressive ways).

So look for a guy who can see in shades of gray. Look for someone who understands the fundamental truth that we’re all perfectly imperfect.

Better to date a man who sees you clearly than one who’s overly attached to his rose-colored glasses.