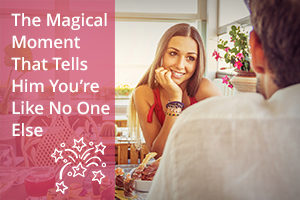 It happens in every relationship.

You say something, and there’s an awkward silence. Tension descends. Something’s wrong. You don’t know what. He looks away. His mouth is tight.

Fear hits you in the gut. You’re losing him! You can’t let that happen.

Or if it’s going to be the one that upends everything he thought was true about love.

So what do you do when that awkward moment happens? When you notice that something you said hit him the wrong way, but you’re not sure why?

Maybe you backtrack. You keep talking, trying to rephrase the sentence or explain yourself. You talk and talk and talk until you get some reaction out of him, any reaction. Then you see him smile, and you breathe a sigh of relief. Phew … crisis over.

“I feel like I said the wrong thing there. That wasn’t my intention.”

How often do you think he hears that?

Not enough, that’s for sure.

Apologies are tricky. Research shows that women say sorry a lot more than men. But it’s not always for good reasons. Many women apologize for things that don’t require an apology, such as getting bumped, being offended, or taking longer to do something than expected.

When you apologize too much for trivial things, “sorry” loses its meaning.

On the other side of the spectrum, some people reserve their “sorry” for times when it really matters. It goes without saying that an apology is required after a major mistake. But most of us don’t make major mistakes that often. We can get out of the habit of saying sorry, which makes it awkward when we do have to apologize.

There’s a third way to use apologies, one that you don’t hear much about:

To acknowledge how he’s feeling.


When you acknowledge that tense or uncomfortable moment out loud, something magical happens.

Again, wow! That’s not something that happens often.

We let too many small moments of discomfort pass by, because we don’t want to draw attention to them.

You don’t really want to know what made his face go cold and his body shift slightly away from you. It can only be bad news.

But, by sticking your head in the sand, you’re not getting crucial information. You need to know what’s going through his head, even if you’re sure you won’t like it. By showing him you’re available to listen, you’re demonstrating that you can take negative feedback.

I know. That sounds like a recipe for disaster. But it’s not, and here’s why.

Relationships are not built on happy experiences alone. They’re forged through pain as well as joy. When a couple goes through a difficult experience together and comes out the other side, their bond is exponentially stronger.

There are difficult moments in every relationship. But most couples let those opportunities slip by. Instead of opening up, being vulnerable, and really listening to one another, they pretend they can’t see what’s going on.

It takes incredible bravery to acknowledge a misstep. Putting yourself forward like that is a game-changer. It creates immediate intimacy. It lays the foundation for trust and respect. It signals to him that this is a woman who’s not like the rest.

So, the next time you notice him shutting down, don’t panic. Do something different. Pause and take a deep breath. Feel the magic of the moment. And speak your heart.

Will he be startled? Maybe.

Will he be honest back? Maybe.

That’s how solid relationships are built, one honest truth at a time.