Home > Dating > The Golden Rule When Giving Gifts to Guys

The Golden Rule When Giving Gifts to Guys 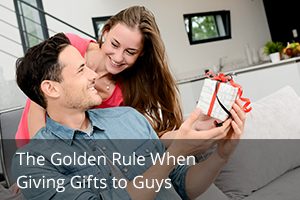 You’ve met a sweet guy who you can’t stop thinking about. Everywhere you go, you see things that make you think of him. You even keep seeing things that you think he should own—a gorgeous tie, a funny t-shirt, a new watch…

Don’t get me wrong—guys love receiving gifts as much as most women do. After all, most men also grew up eagerly waiting for special occasions that are all about gift giving.

Times may be changing, but traditional gender roles still have power. Boys are allowed to get excited about gifts, but over time, they learn to be less visibly excited about the receiving part. Why?

From a young age, men are programmed to see themselves as providers. Naturally, this affects their relationship to gift receiving too.

That’s right. While most women enjoy receiving gifts—even on a first date—for most men the opposite holds true.

Picture a woman showing up with a gift on a first or even fourth date while her date stands around empty handed. Sure, a few guys might be happy to accept the gift and get on with the date, but this could also be the start of a dating disaster.

But don’t worry! A few simple tips can help you navigate the guys and gifts dilemma.

First, let’s be clear. Most guys do love receiving gifts. The trick is to do the giving without making him feel like he has nothing to give or isn’t giving enough. Got it?

First, when it comes to gift giving, timing matters. If he hasn’t given you a gift yet, don’t show up with a new watch or even a used book. You probably want to let him make the first move.

I know—this may sound traditional, but lavishing gifts on a guy who hasn’t yet had a chance to go shopping can backfire. And yes, this may take a bit of time. After all, not all men love shopping.

Second, be aware of scale. The gift of an expensive watch only a few weeks into a relationship is obviously different than the same watch being given on a special anniversary.

How do you measure what scale is appropriate at what point? Think about this from your own perspective. If a man you only recently started dating lavishes an expensive gift on you—let’s say, a diamond necklace—what’s your reaction? Are you seduced or a bit suspicious? Chances are, you’ll have a mixed reaction if an extravagant gift arrives too soon.

While there are no hard and fast rules, personal but inexpensive gifts are generally best for new relationships. Early on, a gift should simply say, “Hey, I’m paying attention to who you are and what you’re passionate about.” Leave the “this is a huge commitment” type of gifts for something that is already serious.

Finally, try to avoid giving cliché gifts. That’s right—not every guy needs or wants a bottle opener in the shape of a baseball bat or a survival tool key chain!

If you’re going to give a gift, use it as an opportunity to say something you may not be able to easily express in words. Most importantly, let him know that you can see he’s not just any other guy.

So what’s the golden rule of giving gifts to guys? Guys love to receive gifts, so don’t hold back! The trick is to give the right types of gifts at the right moment and in a way that doesn’t make him feel like he’s not giving enough.