The Four Tendencies in Relationships

Have you ever dated someone who never got off the couch? 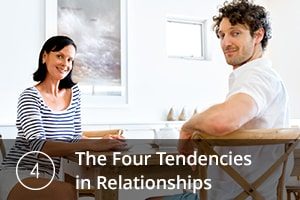 You knew he had amazing potential, but he never did anything with it. Trying to motivate him was a waste of time.

Or maybe you’ve dated the opposite:

Someone whose time was scheduled down to the minute.

He never did anything spontaneously; it all had to be planned in advance. He was amazingly productive but an imperfect boyfriend. He had too many other priorities.

Gretchin Rubin noticed these patterns when she was writing her 2015 bestseller, Better Than Before. She was examining why we find it so hard to establish desired habits and break bad ones.

She found that some people are really disciplined. They’re good at living up to expectations. It’s a point of honor to them. You don’t let anyone down.

These people were also really good at structuring their own time. They set their own goals and worked hard to meet them.

Rubin realized that how a person responds to expectations puts them into one of four categories: Upholder, Questioner, Obliger, and Rebel.

Understand your tendency, and you understand an important component of what makes you tick.

Understand his tendency, and your relationship gets a whole lot easier.

One of the challenges of relationships is working with each other’s quirks and preferences. You have to be able to plan things and organize your time together without driving each other crazy.

If you have different tendencies—a different relationship to discipline, rules, habits and expectations—then you can find yourself caught up in endless arguments.

When Beth was growing up, rules kept her family life flowing smoothly. Whenever there was a problem that kept cropping up, whether it was forgetting coats at school or leaving shoes by the door where someone could trip, her mother laid down a new rule.

So when she fell in love with Jeremy and they decided to move in together, she wanted to set down some ground rules. Having rules would help them live together more harmoniously … or so she thought.

But Jeremy was outraged. He accused her of trying to control him. In fact, every time she tried to establish a rule, he went out of his way to break it.

Beth was in tears. She wondered if they were completely wrong for each other.

I didn’t think so. They just needed to understand each other’s tendencies.

Beth was an Upholder, while Jeremy was a Rebel.

Upholders are excellent at meeting inner and outer expectations. They do well with rules and discipline, unlike Rebels. Rebels hate being told what to do. Their motto is, “You can’t make me, and neither can I.”[1]

For their relationship to work, Beth could certainly set rules for herself, but that wasn’t going to work for Jeremy. She had to learn to be more indirect about getting Jeremy on board, while Jeremy had to learn that his distaste for the rules didn’t make Beth’s desire for rules wrong.

The most common tendencies are Questioners and Obligers.

Questioners question all rules, following only those that make sense to them. Obligers are great at following other people’s rules but struggle to make themselves do anything on their own.

Anya was a Questioner married to an Obliger, and it was driving her crazy. She explained:

“He’ll wake up every morning like clockwork and go to work and do his job, but when it comes to actually doing anything at home, he’s useless. He has all these big dreams and never does anything about them.”

She couldn’t understand how her husband could be so disciplined at work yet unmotivated when he was off the clock.

Anya herself wasn’t like that. She was incredibly disciplined when it came to her own pet projects and goals. But she struggled to give her work the kind of obedience she saw in others. She wanted to know that a task made sense before she put time into it.

Anya was relieved upon learning that her husband was different from her. It was a big relief. She realized she’d been judging him for not being more like her.

So which tendency describes you best:

Can you see how your tendency might have played out in past relationships? Let us know in the comments.