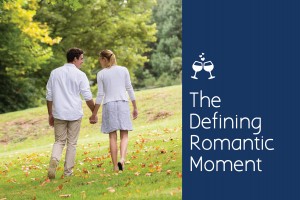 You may be waiting for a moment that’s never going to come.

Remember the big finale in How to Lose a Guy in 10 Days? Kate Hudson thinks the entire romance has been a lie. Heartbroken, she’s on her way out of town.

And then McConaughey realizes he loves her. He goes after her.

Scratch that. Like a vision straight from the pages of the best romance novel ever written, he mounts a motorcycle and races through New York at rush hour to catch her before she can hop on a plane.

It’s enough to make even the hard-hearted swoon. But, it’s also a mirage.

Movies, especially romantic comedies, whittle the highs and lows of relationships down to 90 minutes. That’s a tall order. To make it work, they exaggerate both extremes.

Romantic gestures are BIG. That’s why they tug on our heart strings. But they also saddle us with wildly unrealistic expectations.

Don’t get me wrong. Real relationships have highs and lows. That part is true.

But McConaughey stopping a cab on a New York bridge? John Cusack holding a boom box over his head outside his girlfriend’s window? An elderly Ryan Gosling faithfully sitting by his ailing wife’s bed every day?

Those things may happen in a real life romance, but they are once-in-a-lifetime events. Seeing it all come together (over and over) in 90-minute films makes it seem normal.

I’m not trying to spoil the fun of romance. Rather, I’m trying to point out something beautiful. Something you could miss if you don’t watch for it.

I’m not saying romance is dead. Far from it. You can and should expect the man in your life to sweep you off your feet.

All I’m saying is that real romantic moments aren’t going to look like the stuff you’ve seen on the big screen. They’re far more subtle.

Has he ever looked into your eyes just to tell you he loves you? Or held your hand when you were scared? Or hugged you just because he can?

That’s your McConaughey on the bridge.

No, it’s not as grand. In fact, it’s easy to blow off as no big deal. But those precious, quiet moments are more epic than many of us realize.

And here’s the really good news. You don’t get just one of those. You get a bunch. If you watch for them, there will be times when you get them daily.

A lifetime of small, meaningful gestures is worth way more than one or two big gestures in my book.

It’s totally okay to enjoy movies like How to Lose a Guy in 10 Days. Just don’t get suckered into expecting your love life to mirror Kate Hudson’s.

Keep an eye out for the small stuff he says and does all the time. Find joy, comfort, and passion in those moments instead of holding out for a single, chart-topping romantic gesture.