Home > Dating > The Center of His Universe

The Center of His Universe 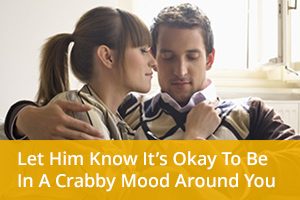 Jenn felt something was off as soon as she saw Steve’s face.

She and Steve had been dating for a few months. And he was usually a pretty chipper guy, but not tonight.

“Everything fine at work?”

“You seem tense,” she said.

Was it something I did? She wondered. This isn’t like him. He doesn’t even seem happy to see me. There goes the spark…

And before long, she had this elaborate theory. Maybe Steve’s lack of enthusiasm meant the relationship’s honeymoon phase was over. Kaput. Done.

Is that what was really going on?

No. Of course not. Like everyone else, there was a lot more on Steve’s plate that day than just dinner with Jenn.

He was stressed about a project at work. One of his co-workers threw him under the bus in front of his boss. To top it off, his sister was micro-managing the plans for his parents’ anniversary party. He had plenty to stress out about.

And here’s the kicker. None of it had anything to do with Jenn.

Your guy may not always be upbeat when you’re around him. He might even be down enough that there are times when it feels like he’s less invested in the relationship. But there’s something critical you need to remember.

He has TONS of other stuff going on in his life. His mood isn’t always about you.

That doesn’t mean you’re not important. Neither does it mean he’s not into you anymore. All it means is that, like yours, his life is full of distractions and potential hassles. A bad day is bound to come along every now and then.

When he has a bad day, there’s one really important thing you need to keep in mind. It’s not your job to regulate his mood.

That’s on him. And really, that’s good news. You wouldn’t be able to keep him in a good mood all the time even if you tried!

But while you can’t turn every frown upside down, there are things you can do to be supportive. Here’s what that looks like.

First, acknowledge that he’s having a bad day. He may want to talk about it, and he may not. Either way, it’s good to let him know you’ve noticed.

The second thing is even more important. Let him know it’s okay to be in a crabby mood around you. Make sure he knows you won’t take it personally. That builds trust and intimacy. It also dramatically increases the likelihood that he’ll actually talk to you about it. 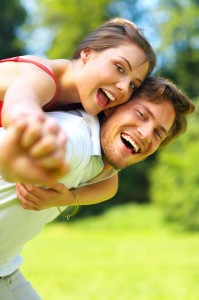 Finally, it’s not a bad idea to do something he enjoys. Have dinner at a restaurant he likes. Watch that silly movie that always makes him laugh. Give him a much-needed back rub.

None of that stuff guarantees a better mood, but he’ll definitely appreciate it. He needs to know he can really be himself around you, even if he’s down in the dumps. That’s huge.

The longer you date someone, the more likely it is you’ll spend time around him when he’s having a rough day. Before you assume his bad mood is a reflection on you, remember this. There are literally millions of other things that could be getting to him.

When he’s down, do what you can to help him get out of the slump. Just don’t automatically assume his bad mood has anything to do with how he feels about you.