The Art of “Exclusive” Flirting 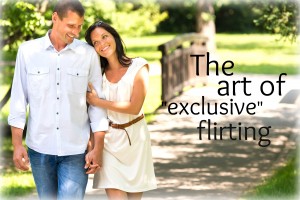 Do you know the difference between “broadcast” flirting and “exclusive” flirting?

Broadcast flirting is on display for everyone to see.

When a woman uses broadcast flirting, everyone around can see what she’s up to.

For example, it’s broadcast flirting when Debbie laughs at all of Daniel’s jokes at the office party and purposefully compliments him in front of others. Exclusive flirting is different.

There are only two people in the club, and the two people share something exclusive. You may think of yourself as someone who would never use flirting as an attraction tool, maybe because of the potential for embarrassment or a distaste for acting like someone you’re not.

But that’s because you think of all flirting as broadcast flirting.

Broadcast flirting dominates our perception of flirting because it’s what we see most often.

Exclusive flirting is different. It happens behind the scenes.

It’s far more subtle, and in my opinion more effective.

Let’s take a look at two examples of exclusive flirting.

One of the qualities of exclusive flirting is leverage.

One-on-one with your man, the smallest gesture feels magnified in significance. Let’s look at an example.

I’ll never forget the impact of a girl I had a deep respect for in high school.

Her name was Cindy.

We were both eighteen.

We had a lot in common, but we did not have the same group of friends.

We basically ignored each other.

Then one day she changed everything.

There was this girl, Angie, who shared my last name (no relation), and our lockers were side-by-side.

She and her boyfriend liked to make out for the entire five minutes between every period throughout the school day.

I was just asking them to scoot over a few inches so I could close my locker door when Cindy walked up and slipped a note into my locker.

She glanced at me, but without much expression on her face, and continued on her way.

For a second I stood there, trying to resist the urge to grab the note and read it right away.

I managed to tuck the note in my pocket instead, and walk to class as if nothing interesting had happened.

Of course, no one cared about my feigned nonchalance but me.

She was so subtle that I was probably the only one who really noticed.

Well, me, Angie, and her slobber buddy.

Anyway, I got to class with enough time to open the note and read it before class started.

It was a simple message.

She mentioned a few things she had noticed about me.

She paid me a few compliments and told me she admired the way I handled certain things.

There was no fanfare or drama, just a simple compliment.

It was up to me if I wanted to imagine the implication of an invisible “check this box if you want to go out with me” clause.

As I passed her in the hall during the next few days, she was just chatting with her group of friends as usual.

But on a few occasions she was walking the opposite direction in the crowded hall as we passed each other.

Without her friends around she locked eyes with me for just a second or two before we both passed silently on our way.

I did not ignore this gesture, in case you were wondering, but the rest of the story is not relevant to my point today.

I just wanted to share an example of exclusive flirting. 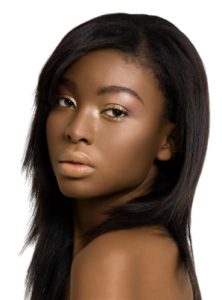 The whole thing would have felt far less magical to me if it involved a lot of staring across the lunch room with girlfriends giggling beside her… followed by a dramatic presentation of a note by her chosen crony… who would deliver it in a way that guaranteed a few elbows in my side from several of my buddies.

That would have been broadcast flirting.

There’s nothing exclusive about it.

It makes the relationship into a soap opera that everyone (strangely) thinks they have ownership in.

I know… you’re not in high school anymore.

So here’s a grown-up example.

But before I get into this example, I just want to let you know about an opportunity to upgrade your flirting skills.

I have put together a concise report with just the information you need to know to get good at flirting right away.

One of the principles you’ll learn from my concise report on flirting skills is this.

Flirting is nothing more than an expression of interest.

Flirting is the language of interest.

A friend of mine used to work in a nursing home as a recreational director.

She told me the unfolding saga of two employees who worked there.

One was an assistant in her department, and the other was the head of the maintenance department.

The assistant had a huge crush on the maintenance guy.

But the only reason my friend knew about it was because the assistant bashfully asked if she would get in trouble for flirting with a fellow employee at work.

After that, they just seemed to become a couple.

My friend had to ask what happened because she never saw any indication of flirting.

The assistant simply showed interest by paying attention to him.

She started by asking about some of his work related routines.

She spaced out her expressions of interest, allowing him to warm up to her.

She would usually only approach him when he was working alone in the hallway, or as she passed him outside the building on her way in.

She would only pause for thirty seconds or so, but she was consistent in demonstrating interest each time she ran into him.

Then she made a move that allowed her to shift her flirting to another level.

After complimenting him about the breadth of his knowledge about maintenance related issues, she asked if he would be horribly offended by the idea of giving her his phone number in case she ran into a problem he could advise her about outside of work.

Now she had an avenue that made exclusive flirting easy.

He was a few years older than her, and texting was not something he had gotten used to.

She got him used to it.

He came to enjoy her text-based friendship and eventually asked her out.

One of my preferred strategies described in my concise flirting report is focused on finding an avenue that makes exclusive flirting easier.

If you enjoyed this article on flirting, there’s a good chance you would enjoy my short report even more.

You can learn more about it here.