Home > Dating > The 5 Stages of a Relationship

The 5 Stages of a Relationship 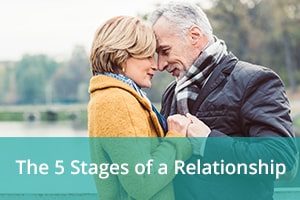 It happened every time.

Angelika would meet a man with potential. Someone she really, REALLY liked.

She’d feel so full of hope. She’d see signs they were meant to be.

Then she’d find out he wasn’t the man she thought he was.

He had issues he hadn’t told her about.

He was no longer as attentive as before.

Angelika realized he wasn’t so extraordinary after all. He was just a guy, like every other guy who’d let her down.

When Angelika came to me, she wanted to nip this pattern in the bud. She wanted to know how to spot an amazing man who would STAY amazing, rather than disappoint her.

I admired Angelika’s determination. I appreciated the fact that she’d taken time to reflect on her past. But the answer I gave her was one she wasn’t expecting to hear.

“What makes a man special is how you see him,” I told her. “So if you want to meet an amazing man, it’s up to you to see what’s amazing about him.”

“But I do!” she said. “I always look for the best in everybody. What I get mad at is when a guy presents himself one way and then turns out to be totally different.”

“Yes,” I agreed. “I can see how you would feel misled. But let me ask you a question. When you go out on a date with someone new, do you immediately tell him everything that’s wrong with you?”

Angelika shook her head. “Of course not!”

“Do you think men feel the same way?”

She bit her lip. “Well, probably.”

I explained that everyone—men and women alike—put their best foot forward in the beginning of a relationship. They’re on their best behavior. They want to be liked.

It’s easy to fall in love with someone who’s trying their best to win you over. You feel liked, admired, appreciated. You feel as if this person gets you on a very deep level.

But you don’t actually know each other very well yet.

You’re in the beginning stages of intimacy, where the amount of time you’re spending together gives you the illusion of having known one another forever.

This is known as the honeymoon phase, and it’s one of the 5 stages of relationships.

Understand how relationships evolve, and you won’t be surprised when your relationship starts to shift in a new direction.

So what are the stages of a relationship?

They can go by different names, but taken together they describe the journey your relationship will take from the initial euphoria of infatuation to the grounded contentment of real love.

For many people, the honeymoon phase is the best part of a relationship. All of the fun with none of the work!

Angelika was getting stuck in the second stage of relationships, the reality check.

This is when the rose-colored glasses come off. Your guy feels safe with you, so he starts to show you more of his real self.

Instead of feeling misled, I told Angelika, feel encouraged. He’s letting his guard down. He’s starting to trust you. You may not like what you see, but real imperfection is better than a perfect illusion.

Even if you persevere through the reality check, you’re not home free. You have another major obstacle ahead:

The power struggle strikes every couple. It can hit right away, or it can lie in wait for several years.

This is when you realize that the two of you don’t always want the same things. He wants things his way, and you want them your way.

Instead of negotiating, you battle for control of the relationship. Who will make the decisions? Who will win? Who’s in charge?

If a couple doesn’t know this stage is coming, they can split up over it. The relationship becomes a source of stress. You’re always fighting. It’s too much work.

But committed couples turn the power struggle around. They realize the enemy is their lack of relationship skills, rather than each other. They commit to finding a mutually respectful way to navigate and even honor their differences.

Their reward is reconciliation, that feeling of peace that comes when you know you can get through anything together.

Couples can go back and forth between the power struggle and reconciliation many times in the course of a relationship.

Ultimately, if they persevere, they begin to see that love is nothing like what they thought it was. It’s not a feeling. It’s a partnership. It’s something they choose, rather than something they have.

You can tell couples who’ve achieved real love by the way they see each other through rose-colored glasses.

It’s not like before. Now they know each other’s flaws. But they choose to see the best in each other, despite knowing the worst.

And that, I told Angelika, is a relationship worth enduring a few disappointments for.