Home > Dating > Tempt Him Like a Bad Girl Without Being Bad

Tempt Him Like a Bad Girl Without Being Bad 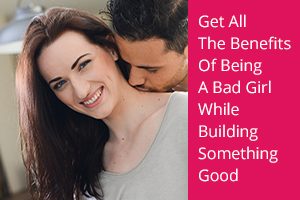 There’s a myth that men are attracted to bad girls.

And they kind of are.

I say “kind of” because the myth is both true and false. Guys are attracted to the idea of dating a bad girl. That part is absolutely true. Bad girls represent adventure, strength, and excitement.

But research shows that while men like the idea of dating a bad girl, they actually prefer the reality of dating someone more mature.[i] Someone who genuinely cares about them. Someone who is tuned into their emotional needs.

But could you have the best of both worlds? You’re not a bad girl. In fact, you’re invested in being a well-balanced, mature adult. That’s why you read stuff like this. To invest in better relationships.

The answer lies in understanding what guys really like. Not bad girls, but a few of the qualities they think bad girls represent.[ii]

And guess what? You don’t have to be a bad girl to embrace those qualities.

Guys think of bad girls as the kind of women who are willing to try anything once.

They’re not afraid to experience something new or different. They don’t mind getting their hands dirty. They’re comfortable in a cocktail dress and heels, or grungy jeans and sneakers.

What the man in your life really wants to know is that when he feels the need to track down a new adventure, you won’t hold him back.

And if you’re willing to hit the trail with him, even better.

Here is the next quality men find attractive in a bad girl: strength.

Bad girls are anything but needy.

That doesn’t mean they don’t have emotions. They’re allowed to care. Remember, guys actually like that.

What it does mean is they’re okay with being on their own.

No guy wants to be with a girl who’s so insecure she clings to him constantly. Confident, strong, independent women are sexy. Period.

And good news! You can swing that.

When a guy dates a bad girl, he expects the unexpected—both in and outside of the bedroom.

Without question, part of the appeal of dating a bad girl is the promise that things will be passionate. Sometimes, recklessly passionate.

And you don’t have to take out a line of credit at Victoria’s Secret to pull that off.

Surprise him. With a kiss, or a back rub, or, if you’re feeling frisky, something even more sensual.

Just don’t let the physical part of your relationship fall into a perfectly predictable pattern. That’s the opposite of exciting.

You don’t have to ditch your sense of responsibility or change your personality to harness the power of being a bad girl. All you have to do is embrace the things about being bad that guys like. 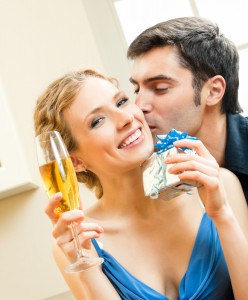 Be adventurous with him. Let him see your confidence and strength. And make it a point to inject some fresh excitement into the physical side of things on a regular basis.

Do that and you’ll get all the benefits of being a bad girl while building something good.

[i] Society for Personality and Social Psychology. “Why do men prefer nice women? Responsiveness and desire.” ScienceDaily. ScienceDaily, 25 July 2014.