Home > Commitment > Should You Settle? 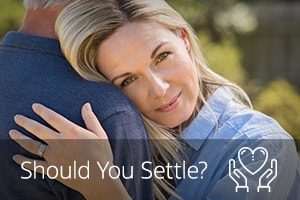 “Should I hold out for something better?

Or should I settle for what I’ve got?”

For those women, asking that question takes great courage. It opens up the possibility of disrupting their entire life. And yet they can’t live without knowing:

Is this guy the best I’m going to get? Or is there someone else out there for me?

It’s an honest question. You want to know you got the best deal possible, so to speak.

Maybe this guy isn’t your soulmate. Maybe, if you’d just waited another year or tried online dating one more time, you’d have found your real soulmate. The one who’s exactly like you in all the ways that matter. The one who doesn’t pick his nose or ignore you when the game is on. The one who sweeps you off your feet.

Other women have boyfriends like that. You can tell by their smile, like a cat that’s got the cream. You just know they get treated like a queen.

Is it time to trade up?

Let’s find out. Here are the 4 questions I would ask.

If you start to have second thoughts when you’re dating someone, then pay attention to what your intuition is telling you. When doubts are there from the beginning, they’re a sign that something isn’t quite right.

However, if you’re married or in a long-term committed relationship, then those second thoughts aren’t anything to be scared of. They’re bringing you a message. Your relationship needs more tender loving care.

It’s challenging to live with one person for the rest of your life. You see all his flaws and imperfections, and he sees yours. Of course you’re going to wonder if some mythical Prince Charming exists. It’s appealing to imagine a life where you waltz through every day in perfect harmony with the love of your life.

In real life, we’re flawed and imperfect. We hurt each other accidentally. We’re not always as careful with one another’s feelings as we could be.

Instead of fantasizing about Prince Charming, deal with those difficult feelings. Wade through the mud with him. What’s missing from your relationship? What aren’t you telling one another? What aren’t you admitting to yourself? How can you support each other better? 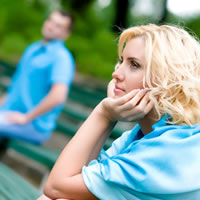 Here’s the next question you should be asking…

Some things have to be there. You can’t have a relationship without them.

Respectful, honest, trustworthy men aren’t always exciting. But if you want a long-term relationship, you want someone you can lean on. Someone solid. Someone who’s not going to run or deflect responsibility when the going gets tough.

It’s not an honest relationship when you can’t be yourself.

So many people make compromises in order to have a relationship. Maybe you pretend you don’t really want to have children right away, or that you’re okay with him not calling you. You don’t want to seem needy or scare him off.

If you sense that he wouldn’t want to be with you if he knew the “truth” about you, then you’re shortchanging yourself. Give him the chance to know what’s in your heart, even if you think he might leave you.

You’ll never know if he loves you if you don’t let him know who you are.

Often, the women who worry most about settling are those who are feeling pressured.

Maybe they’re getting older, and they worry that this is their last chance to find love. Maybe they’re feeling pressured to settle down. Maybe they just hate being single.

Research shows that the more you fear being single, the more willing you are to settle for less in your relationships.

“If I had all the time in the world to settle down, if several other guys were interested in me right now, would I still choose this relationship?”

Your answer tells you everything you need to know.

In the end, no one can tell you whether you should hold out for a better match. Listen to the part of you that knows, deep inside, whether you’re settling for less or simply not putting in the work your relationship deserves.