Home > Dating > Only Be Exclusive When the Timing Is Right

Only Be Exclusive When the Timing Is Right 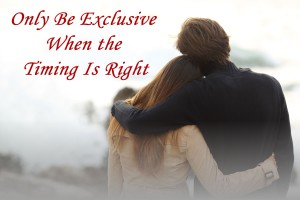 Nothing is better than falling in love.

But…it’s not always in your best interest to be exclusive early in the relationship.

Let me explain why.

First, a quick story to illustrate something important.

I received a letter from a division of the US military requesting that I work for them part-time and also join the reserves. They have an interest in a particular set of unusual skills I share with a very small portion of the US population.

I called the recruiting officer to discuss the details of their offer. It all sounded pretty good. They wanted to pay me a lot of money for a very small amount of my time. There was only one problem.

The problem was they also wanted the exclusive right to force me to leave my relationship coaching practice and social life behind if they ever needed my services for a protracted war overseas.

That would essentially give them the power to shut down my livelihood, which would dwindle and possibly disappear by the time they let me come home if I was ever deployed.

Here’s how this relates to dating men. A lot of women are frustrated with how slow men are to commit. As a result, they push for an exclusive relationship as soon as he is willing.

If you’re exclusive with a guy who is just okay, you will drop your efforts to meet new men, and you’ll be hesitant to dump this guy if time reveals he’s not as amazing as he first seemed. If he hasn’t done anything wrong, you’ll feel bad about leaving him.

Sadly, a lot of women end up married to a guy who is just “good enough” but not really her true love because of this very process.

When things are going pretty well in a relationship, there’s a strong desire to “take him off the market” so to speak. I get that.

But consider this. If he’s right for you, he’s going to adore you. Going slow just means he has to prove his interest. There are several advantages to keeping him on the hunt.

One of those advantages is that the harder he works to have a relationship with you, the more he will intrinsically value exclusivity with you once it is achieved.

On top of that, his persistence over time proves he believes you’re special. Believe me, you do not want to end up with a man who thinks you are just “good enough.”

By slowing the race to exclusivity, you avoid slamming the door on someone else who might have been your perfect match.

Getting to know lots of different men doesn’t always feel cozy and perfect. But as soon as you turn down all your other suitors, you have (at least temporarily) closed the door to other possibilities.

The time for that may come. Just make sure you don’t rush into it so soon that you miss the opportunity to learn who is truly right for you, and who isn’t.

If you slow down and take your time, you have the best of both worlds. You’ll give more men a chance to prove they are right for you, and you’ll avoid diving headfirst into a relationship that may not turn out to be the best.