Home > Commitment > One Surefire Way to Ruin Your Relationship

One Surefire Way to Ruin Your Relationship 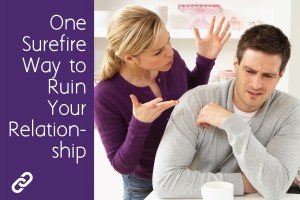 Let’s consider a crazy idea. Suppose you were on a mission to wreck your current relationship. How would you do it?

Sure, there are thousands of ways to slay intimacy, but is there one that trumps all the rest? You bet. And it doesn’t just work. It works really well.

If you wanted to push him away, you’d want to know the hassle-free technique with guaranteed results, right? No doubt.

But that’s not your goal!

Trust me, you still want to know.

You want to know because a lot of women unknowingly do this one thing every day. Completely unaware of the real effect, some make it the cornerstone of their communication. In fact, there are even women who think this strategy is the key to relational bliss.

They could not be more wrong.

So, what is it? What’s the surefire relationship killer? Nagging your man to “open up”. Insisting there’s something bothering him. Telling him he really needs to admit something is bothering him.

Men can be emotionally elusive creatures. Sometimes they shut down when it seems like they ought to open up. You know what I’m talking about. You can tell something’s off, but when you ask what’s wrong he just says, “Nothing.”

You care about him. Plus, you can see right through that answer. You’re not being nosy. You genuinely want to be supportive.

And there may be one other reason to pry. What if he’s upset at you?

So you try to get him to talk. You see it as concern, for him and for the relationship. There’s just one problem.

For men, pressure to open up works in reverse. Forcing him to share his feelings can absolutely kill your connection.

Does that mean you just live with his silence? Nope. That would drive you crazy! Besides, there’s a better option. This is what you should do.

When you feel like something’s off, mention it but don’t push for more information. Instead smile, do your best to look completely confident, and go on to the next thing.

Nine times out of ten, he’ll end up talking.

This works because men have a thing for confident women. When you let him know you’re aware but not worried, you give off a confident vibe that’s hard to ignore. To a guy, it’s the dead opposite of nagging.

Heck, it’s how guys get each other to open up without realizing they’re doing it!

Instead of looking nosey or needy, you’ll be the picture of emotional strength. That will make him want to talk to you.

But to pull it off you have to dig deep and really feel that confidence. Your guy will see through an act. You have to root yourself in real self-assurance.

It may sound weird, but it works. The next time he’s upset about something, give it a whirl. Mention what you’ve noticed. Say something like, “Seems like something’s on your mind today. Let me know if you feel like talking about it.”

And then move on to another topic of conversation. With confidence.

Turn one of the biggest mistakes a lot of women make into your own personal power play. Don’t nag him to “open up.” Invite him to share by showing him your confident, stable side.